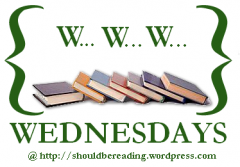 This is a weekly book meme hosted by Should Be Reading.
To play along, just answer the following three (3) questions…

Soul Theif
By Jana Oliver
Release Date: August 30, 2011
Series: The Demon Trappers
Description:
Riley Blackthorne’s adventures continue in the second spellbinding Demon Trappers novel, as she battles demons… and a love that could destroy her.
At the start of the second thrilling installment of the Demon Trappers series, 17-year-old Riley Blackthorne has about had it up to here. After the devastating battle at the Tabernacle, trappers are dead and injured, her sweet boyfriend Simon is gravely injured, and now her beloved late father’s been illegally poached from his grave by a very powerful necromancer. Add to the mix: Ori, one sizzling hot freelance demon hunter who’s made himself Riley’s unofficial body guard, and Beck, a super over-protective “friend” who acts more like a grouchy granddad, and Riley’s almost ready to leave Atlanta altogether.
But as the demon count in Atlanta increases, the already crippled Trappers Guild has its hands full, and, when the Vatican finally sends its own Demon Hunters to take care of the city’s “little” problem, pandemonium breaks loose. Only Riley knows that she might be the center of Hell’s attention: an extremely powerful Grade 5 demon is stalking her, and her luck can't last forever. As Riley’s life becomes a dangerous balancing act, will she be strong enough not to tip? And who will be there to catch her if she falls?

Possess
By Gretchen McNeil
Release Date: August 23, 2011
Description:
Fifteen-year-old Bridget Liu just wants to be left alone: by her mom, by the cute son of a local police sergeant, and by the eerie voices she can suddenly and inexplicably hear. Unfortunately for Bridget, it turns out the voices are demons – and Bridget has the rare ability to banish them back to whatever hell they came from.
Terrified to tell people about her new power, Bridget confides in a local priest who enlists her help in increasingly dangerous cases of demonic possession. But just as she is starting to come to terms with her new power, Bridget receives a startling message from one of the demons. Now Bridget must unlock the secret to the demons' plan before someone close to her winds up dead – or worse, the human vessel of a demon king.

The Demon Trapper's Daughter
by Jana Oliver
Release Date:
Series: The Deamon Trappers
Description:
Demon Trapper Riley Blackthorne just needs a chance to prove herself—and that’s exactly what Lucifer is counting on…
It’s the year 2018, and with human society seriously disrupted by the economic upheavals of the previous decade, Lucifer has increased the number of demons in all major cities. Atlanta is no exception. Fortunately, humans are protected by Demon Trappers, who work to keep homes and streets safe from the things that go bump in the night. Seventeen-year-old Riley, only daughter of legendary Demon Trapper Paul Blackthorne, has always dreamed of following in her father’s footsteps. When she’s not keeping up with her homework or trying to manage her growing attraction to fellow Trapper apprentice, Simon, Riley’s out saving citizens from Grade One Hellspawn. Business as usual, really, for a demon-trapping teen. When a Grade Five Geo-Fiend crashes Riley’s routine assignment at a library, jeopardizing her life and her chosen livelihood, she realizes that she’s caught in the middle of a battle between Heaven and Hell.

Destined
by PC Cast and Kristin Cast
Release Date: October 25, 2011
Series: House of Night
Description:
In Destined, the forces of Light and Dark collide as their epic struggle focuses on Tulsa's House of Night. Zoey is home where she belongs, safe with her Guardian Warrior, Stark, by her side and preparing to face off against Neferet. Kalona has released his hold on Rephaim, and, through Nyx's gift of a human form, he and Stevie Rae are finally able to be together if Rephaim can truly walk the path of the Goddess and stay free of his father's shadow.
But is Zoey really safe? Does she truly know those who are closest to her? And will love win when it is tested by the very soul of Darkness? Find out what s destined in the next thrilling chapter of the House of Night series.

Drink Deep
by Chloe Neill
Release Date: November 1, 2011
Series: Chicagoland Vampires
Description:
Clouds are brewing over Cadogan House, and recently turned vampire Merit can't tell if this is the darkness before the dawn or the calm before the storm. With the city itself in turmoil over paranormals and the state threatening to pass a paranormal registration act, times haven't been this precarious for vampires since they came out of the closet. If only they could lay low for a bit, and let the mortals calm down.
That's when the waters of Lake Michigan suddenly turn pitch black-and things really start getting ugly. Chicago's mayor insists it's nothing to worry about, but Merit knows only the darkest magic could have woven a spell powerful enough to change the very fabric of nature. She'll have to turn to friends old and new to find out who's behind this, and stop them before it's too late for vampires and humans alike.
Posted by Cathy De Los Santos at 7:33 AM

They all sound rather good! I shall have to look out for some of them. :)

Ohhh, I love your list. Not read any of those yet but gorgeous covers. Most of those are on my TBR list.

The Demon Trappers series is one I want to look into. I hope you enjoy!

I haven't read any of those, but the covers look amazing!