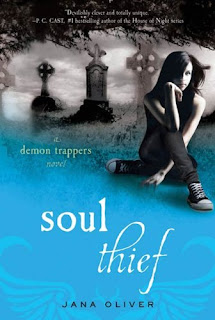 Description:
Riley Blackthorne’s adventures continue in the second spellbinding Demon Trappers novel, as she battles demons… and a love that could destroy her.

At the start of the second thrilling installment of the Demon Trappers series, 17-year-old Riley Blackthorne has about had it up to here. After the devastating battle at the Tabernacle, trappers are dead and injured, her sweet boyfriend Simon is gravely injured, and now her beloved late father’s been illegally poached from his grave by a very powerful necromancer. Add to the mix: Ori, one sizzling hot freelance demon hunter who’s made himself Riley’s unofficial body guard, and Beck, a super over-protective “friend” who acts more like a grouchy granddad, and Riley’s almost ready to leave Atlanta altogether.
But as the demon count in Atlanta increases, the already crippled Trappers Guild has its hands full, and, when the Vatican finally sends its own Demon Hunters to take care of the city’s “little” problem, pandemonium breaks loose. Only Riley knows that she might be the center of Hell’s attention: an extremely powerful Grade 5 demon is stalking her, and her luck can't last forever. As Riley’s life becomes a dangerous balancing act, will she be strong enough not to tip? And who will be there to catch her if she falls

Review:
Ok first let me start by saying the first book was good but not fabulous.  This book kept me absolutely riveted.  I didn't want to put it down.  (shhh I even just finished reading it at work that's how good it is) It was everything I wanted to first book to be and more.  We continue on with Riley's story where the #5 demon is after her, but she doesn't know why.  Her boyfriend is back but he's not the same, Beck is more worried about her than ever and now Ori the sexy stranger who says he is a freelance demon hunter.  It's crazy, fun, exciting, adventurous, drama, everything all in one.

I loved how Riley's character has grown as she comes into her own, even if she did make a huge mistake towards the end of the book, everything happes for a reason.  And I can't wait to see what that reason is in the next book.  We also get to experience a little more of Beck's feelings towards Riley's and vice versa, but that's too late.  But really I don't think it is, I have high hopes for those two.  Ori, well I can't say too much on him without it being a spoiler.  I'll keep my reservations about him to myself.  The Vatican's demon hunters are in the picture now too, we meet a few of them, and a shady reporter which I do not like for obvious reasons once you read the book.  She's bad news I just know it.  They didn't get much face time in this book but I have a feeling they might be all over the next book.  Especially since we ended with Riley being on the run - from basically everyone!

Now she owes a favor to two sides, what is she going to do?  Can they zero each other out?  What does her father have to say for himself now that he's back (reanimated still)? What will happen with Beck and Riley, or Simon, even Ori?

Have you read this if so please let me know what you think.
Posted by Cathy De Los Santos at 3:03 PM

Soul Thief sounds like it has a lot more going for it than The Demon Trapper's Daughter did. I wasn't sure I wanted to continue reading the series but after reading you're review I know I have to. Thanks!!! :)

What's good about book blogs is that we're exposed to new writers and other interesting storylines. I've never heard of this series and the author before but something that keeps a reader riveted is a good sign.