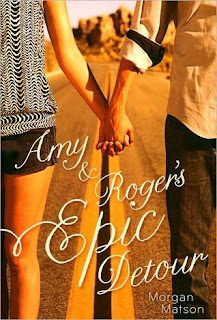 Product Description:
Amy Curry thinks her life sucks. Her mom decides to move from California to Connecticut to start anew—just in time for Amy's senior year. Her dad recently died in a car accident. So Amy embarks on a road trip to escape from it all, driving cross-country from the home she's always known toward her new life. Joining Amy on the road trip is Roger, the son of Amy's mother's old friend. Amy hasn’t seen him in years, and she is less than thrilled to be driving across the country with a guy she barely knows. So she's surprised to find that she is developing a crush on him. At the same time, she’s coming to terms with her father’s death and how to put her own life back together after the accident. Told in traditional narrative as well as scraps from the road—diner napkins, motel receipts, postcards—this is the story of one girl's journey to find herself.


Review:
So I read this because I saw someones review on it and I had to check it out.  It also helps that I'm going on a road trip and can I just saw I wish I had Amy's book to take notes while I'm driving down the east coast.  Anyway on to the review.  This book was great.  Amy just recently lost her father, and her mother moved to Connecticut to get their new house situated.  Her twin brother was in rehab and Amy had to get to the east coast from California but she doesn't drive and needs to bring the car to her mother.  This is where Roger comes into play.  He's going to dry her mother's car with her to the east coast.  An adventure I would love to take.  Cross country.  So throughout the book you learn that Roger recently broke up with someone but is still not over them hence one of their detours.  They really did take the scenic route but along the way they both learned so much about each other, about how life is and how things will be all right in the end. It was a really cute love store, with a little bit of loss, and healing.  Great read and again I wish I had that travel book.

Have you read it?  What do you think?
Posted by Cathy De Los Santos at 7:21 PM