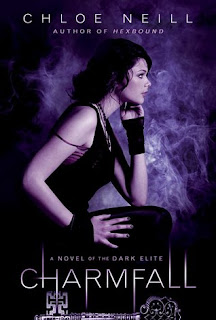 Product Description:
High school can be a battlefield, but for Lily Parker, surviving at St. Sophia’s School for Girls is a matter of life and death...


Protecting Chicago from the dark side can be an exhausting job, especially when you’re a junior. So when the girls of St. Sophia’s start gearing up for Sneak, their fall formal, Lily decides to join in on some good, old-fashioned party prep—even if it means not giving demons, vampires and the twisted magic users known as Reapers her undivided attention.

But when a Reaper infiltrates the school, Lily doesn’t forget what she’s sworn to protect. She reaches deep into herself to draw out her magic—and finds that it’s gone. And it turns out she’s not alone. A magical blackout has slammed through paranormal Chicago, and no one knows what—or who—caused it. But Lily knows getting back her magic is worth the risk of going behind enemy lines...

What are you waiting on?
Posted by Cathy De Los Santos at 7:18 AM

That one sounds interesting...and suspenseful. Hope you enjoy it!
My WoW

This book looks good. The Chicagoland Vampire series in on my TBR list.

I've never heard of this series before I Don't think. It sounds pretty neat though I'll have to check out book 1 :)

Thanks for stopping by! I'm reading Neill's Drink Deep right now, but I haven't read her YA series yet!