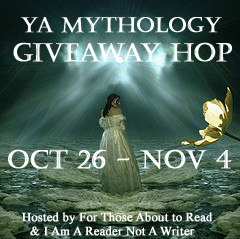 This giveaway is being hosted by Kathy from I Am A Reader, Not A Writer and For Those About to Read.  I have realized a lot of books I've read recently had a bit of mythology in it whether it was Centaurs, Gods and Goddesses, Medusa, and other mythological creatures and people.  They are all wonderful and I can't get enough of them but my favorite so fair is Aimee Carter's The Goddess Test Series.  There are so many Greek Gods and Goddesses in this book that I think it's perfect for this giveaway hop.

So if you would like to win an E-book of the first book in the series The Goddess Test make sure to sign up using the Rafflecopter below.  Have fun and remember reading i an escape into a magical world that you can experience as many times as you want!


The Goddess Test by Aimee Carter 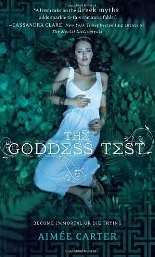 EVERY GIRL WHO HAS TAKEN THE TEST HAS DIED.

It's always been just Kate and her mom--and her mother is dying. Her last wish? To move back to her childhood home. So Kate's going to start at a new school with no friends, no other family and the fear that her mother won't live past the fall.

Then she meets Henry. Dark. Tortured. And mesmerizing. He claims to be Hades, god of the Underworld--and if she accepts his bargain, he'll keep her mother alive while Kate tries to pass seven tests.

Kate is sure he's crazy--until she sees him bring a girl back from the dead. Now saving her mother seems crazily possible. If she succeeds, she'll become Henry's future bride and a goddess.

My favorite is Athena

My favorite is Aphrodite, Thanks for the giveaway!

love athena for her wisdom

My favorite god is Poseidon! I would love to control the waters.

My favorite is Athena.

Artemis is my favorite!! :)

My favourite is Artemis!! Thanks for the giveaway!!

My favorite is HADES!!

My favorite is either Athena or Zeus.

Athena,
Thanks for the giveaway.

My favorite is Athena!

Thanks for this giveaway.

Persephone is my favorite!

a reader who reads said...

My favorite has always boon Athena. You gotta love that the Greeks made a woman the god of Wisdom and the rational side of war!

Poseidon is my favorite!

It's so hard to decide. Maybe Aphrodite.

Thanks for giving away a Ebook; that way a foreigner like me can participate. Book Depository doesn't ship to my country - Azerbaijan.

It depends on what myth/retelling we are talking about. I really like Athena and Aretmis in the real myths, but for something like Xena - Aphrodite was such a fun character!

My favourite is Hades and Aphrodite.

Oh my gosh! I've always wanted to read this book! Great choice!! Thank you so much for your generosity and this great giveaway! Was Thor a god? he sure looks it in the movie, lol! :D (Angie Edwards)

Persephone is my fave!

One of my favorites is Artemis! :)

I don't have a hard favorite god or goddess but I do love retellings of most mythologies.
Thanks for this giveaway!

My favorite god/goddess would have to be Poseidon.