Review: Beyond the Veil 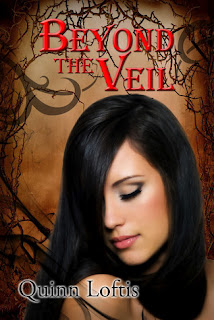 Beyond the Veil
By Quinn Loftis
Release Date: September 30, 2012
Series: The Grey Wolves

Though the Serbian pack has been brought to heel thanks to the downfall of their Alpha, the war is far from over.

Desdemona, a witch of unfathomable power, has escaped the wolves’ wrath, but she will not go quietly into the night. She takes refuge in a place where even the smallest sliver of light does not dare to enter. Though she had to flee, she has not given up on the t...more Though the Serbian pack has been brought to heel thanks to the downfall of their Alpha, the war is far from over.

Desdemona, a witch of unfathomable power, has escaped the wolves’ wrath, but she will not go quietly into the night. She takes refuge in a place where even the smallest sliver of light does not dare to enter. Though she had to flee, she has not given up on the treasure she wishes to acquire. Her depravity knows no bounds; she's even willing to search for the one who can assist her in opening a Veil that has not been opened in millennia – with good reason: the danger is incalculable.
Meanwhile, there are major changes rippling through the Romanian Grey wolves. Decebel has become Alpha to the Serbian pack in an effort to begin to unite the Canis lupis species. Their numbers are dwindling in the wake of the shortage of true mates and lack of offspring. The wolves are beginning to lose faith and darkness seems to be crashing in on them from all sides. But the winds of change are blowing, changes that will alter the future of not only the Canis lupis, but of another ancient race as well.

Amidst all of this, Sally is continuing to come to terms with her relationship with the playful, charming, flirty, unbelievably handsome bartender – who happens to be a member of the Romanian pack.

If all that weren’t enough, the Fates have decided to pay a little visit to Jen. It’s time to collect. She cheated the Fates of a life, her life. Now they want what they are due. The problem? It’s more than Jen is willing to pay.

Yes, the war is indeed far from over. Bargains will be struck, declarations will be made, sacrifices will be given, love will be tested, and trust will be questioned as evil makes its stand against them all.


This book was amazing!  I can’t get enough of this series and I can’t believe it’s almost done, I think it needs to keep going because seven books is just not enough and this is only the fifth one.  From the very beginning my all was put into reading this book because I’ve taken the journey with all the characters and all their hardships, good times and joys.  This book had me reeling off emotions all over the place.


We start off with Jen being her usual self and she had me laughing myself to tears at times.  I don’t know what it is but she’s so well written, likable and just someone you would want to be friends with just for the entertainment value.  The three girls are separated between two packs and are trying to accommodate the changes that are being made all the while remembering the battle they just went through.
Sally is now Costin’s mate but before the blood rites and bonding is done there is the typical possessiveness and arguing with other wolves, it’s even more for her because wolves are drawn to her because she is the healer.  It’s all very cute though their relationship because she is so shy and believes to not be worthy of Costin when the whole time he just can’t get enough of her.  Their relationship was adorable in its sweetness.


All the while there are changes to who can be mated with who, which brings a great surprise to many involved, but I believe this will be for the best in the end.  All of this is leading up to something much bigger than all of them and I can feel it.  And I can’t wait for it.  The new mated couples in this book again as I said they were a surprise but a very happy one which I can’t wait to play out.


Desdemona, the witch, is still very much trying to bring darkness to all; she wants to be the most powerful, by taking the healers blood.  So she seeks the Warlock King and strikes a deal with him, but will he go through with it after he learns who his mate will be?  It’s all about the mates I swear but man this book was good, so very very good.  There’s a lot more that is happening and will be happening but really I don’t want to ruin the experience for anyone who is about to read this book, which you really need to read this series if you haven’t already.


The author has grown a lot throughout the series and I can tell in her writing in her style in the events that is going on and I applaud her for that because with every book it just keeps getting better and better.  You know how some series they tend to wane off or go so extravagant that sometimes you don’t want to finish it.  Especially if it’s a long series (not a trilogy) then you end up just reading it because you have to know what happens next even if you date care you just have to complete it.  Well that is NOT the cause with the Grey Wolves Series.  Quinn Loftis will take you from turn to turn to turn with out even looking back because this is one rollercoaster ride I wouldn’t want to get off.  Really the amount of gasps, heart drops, tears, laughs, shocked faced, open mouthed gaping moments in this series is worth every single read.  You really don’t know what’s going to happen next and that’s the best part of the whole thing.  Well done!  Call me Fan Girl right now because that’s what I am and I’m proud of it.
Posted by Cathy De Los Santos at 12:30 AM