Review: The Next Door Boys 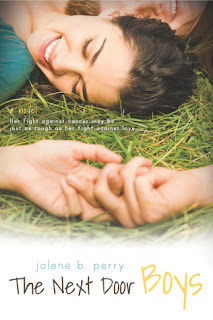 Description:
With her body still recovering from last year's cancer treatments, Leigh Tressman is determined to be independent. Despite the interference from her overprotective brother, physical frustrations, and spiritual dilemmas not to mention the ever expanding line of young men ready to fall in love with her, Leigh discovers what it actually means to stand on her own and learns that love can be found in unexpected but delightful places.

Review:
I’ve adored books by this author in the past, especially when I was introduced to her through a blog tour and thought her writing style and story were both great. So I was excited to finally catch a break and be able to read this book by her. I really loved this cover and it completely drew me in to the story.


I’m not usually a very religious person but I pick up a book every now and again that has religious beliefs behind them, and even though this book was Mormon that really was just the back-story on the characters. This book was so much more, it was about a deeper understanding of relationships, surviving cancer, going to school and separating from your parents. And of course my favorite realizing what you have was right in front of you the whole time, you just needed to realize it.

We meet Leigh who has just gone into remission from having ovarian cancer. She is now attending BYU with her older brother, that’s the only reason her parents are letting her go there because he will be near by. She has a little apartment that is next door to her brother and his roommate Brian. They are all very close with one another, her roommates, the neighbors they all spend a lot of time together, like a tight knit family. During the beginning of the book Leigh is still in the recovery stages so a lot of people look out for her, some more than others. But throughout the book she starts to get healthier than before.

She meets a guy named Noah who is on the verge of becoming a star in LA. He goes back and forth from school to auditions and she really has a great time with him. It’s all about the fun but with this relationship she starts to lose herself and her family because she’s to preoccupied with the relationship. She doesn’t know if what she feels for him is love or something else but things digress and a decision needs to be made about their relationship.

Throughout the book again as I said you see the different relationships and what made people who they are today. Really if you change one thing would you be a completely different person, probably. It was a really great story and I can’t wait to continue their experiences in the next book.
Posted by Cathy De Los Santos at 7:14 AM