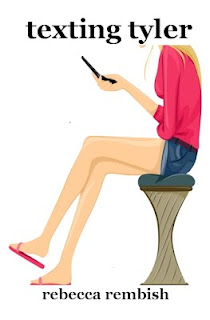 Amy is forced to spend the week at her grandmother’s house in Arizona. She returns home to New York with a closer bond to her grandmother, with a best friend who she adores and with a boyfriend who she believes is everything she has ever dreamed of. After months of communication with the two new men in her life, things finally seem to be falling in to place for Amy. That is, until she starts to realize whom her heart is truly longing for. When she returns to Arizona almost a year later, things don’t go quite as planned when she is blindsided not only by the death of her grandmother, but learns the truth behind the text messages from Tyler. With time, and a little help from her grandmother’s memory we are able to see if her broken heart can heal and get Amy back on the course she was destined for.

************************************
Review:
The author wrote a really cute and endearing love story about a girl who is very insecure about herself and trying to come to terms with everything around her.  This was a very cute and fun, fast easy read that I enjoyed several times over.  I would recommend this to anyone in a heartbeat, I never realized really how much a difference the written word can be compared to a text.  There really is more meaning behind it.

We meet Amy as she is on her way for a week to stay with her Grandma.  She's never had a boyfriend, doesn't really have friends, is very smart but still very antisocial.  So go figure when she goes to her grandmas house she meets Chris and then meets his friends.  All of a sudden she's a social butterfly and is having so much fun with the people she's just met.  She has a bit of a crush on Chris but he never made a move on her, she being inexperienced didn't know what to think of it other than he didn't like her in that way.  The entire time Chris really adored her, he was falling for her but he too was inexperienced.  He's never liked anyone like this before.

They go on a number of group dates/hang outs/ and even spend some time alone, and it seemed as if something was going to happen but then they got interrupted.  She was only there for a week but ti felt so much longer to the group of friends and they were definitely going to miss each other.  On the last night she was able to hang out with them, Chris's brother Tyler was throwing a party and needed Chris to help bring his friends home.  Taking a chance and bringing Amy back with him he had no idea that when he got back he would see Tyler and Amy kissing.

After that she leaves back to New York but they still keep in contact, her and Chris, and she also has it in her mind that Tyler is now her boyfriend.  This is where her inexperience really shines brightly.  Everyone around her can see it but she's in denial.  She starts receiving texts from him, but really they are from Chris.  All the while still talking to Chris every day.  her feelings grow for him and it just confuses her even more.

Overall the story was great.  I really enjoyed reading every minute of it and couldn't wait to see what happened next throughout the whole story.  makes you miss the innocence you once had when you were so young.  We are all so jaded.  You have to read this book if you want something quick and entertaining to read.  The cover is really cute and simple and I can totally picture Amy doing that.


They walked out to the parking lot and said their goodbyes.

“See ya tomorrow!” Dana shouted to them as they were walking away.

“Okay!” Amy yelled back. They had just left and she already couldn’t wait to see them again the next day.

Chris puffed his chest out. “I knew you’d like them. I could tell they really liked you too.”

They waited by the car for Tyler, who took his time walking over to join them. He moved slowly, clicking the doors open with his key chain. They were all about to get in the car when Tyler turned to Chris.

“Hey man chuck this for me.” Tyler held out the soda cup he was slurping on during the movie.

“Chuck it yourself,” Chris said.

“Just give it to me.” Chris huffed as he took the soda cup from his brother and walked over to the trashcan.

Amy and Tyler got in to the car shutting the doors. She heard a click and looked over at Tyler who was laughing. “Watch this,” he said to her.

A moment later Chris came back and opened the door to the car. Clunk, it wouldn’t open.

“Unlock the door,” Chris said through the window.

Tyler clicked the button back and forth quickly. Chris went to open the door. Clunk, it wouldn’t open.

Amy shifted uncomfortably in her seat. Tyler looked over at her and lifted his eyebrows at her as he continued to laugh.

“Tyler, I swear to God man. Why you doing this?” Chris asked shaking his head.

Amy felt bad for him. Tyler continued to ignore him and started the car. Amy looked out the window at Chris giving him a sympathetic look. Tyler put the car in drive and drove forward a few feet. Chris walked forward a few feet and knocked on the window.

Tyler clicked the door and this time Chris was able to get in. “You’re such a puss Chris. I shoulda made you walk home.” Tyler laughed at him before turning the volume of the music up high so that no one was able to talk the entire ride home. 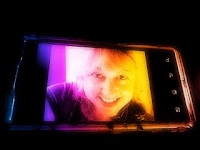 Rebecca Rembish is a stay at home mom to a mini super-hero. To help balance out her adventurous days with a pre-schooler and grown-up married life, she escapes by writing Young Adult Romantic Fiction.

She is a compulsive nail biter, who makes daily trips to 7-11 for blueberry coffee. Rebecca grew up in Rockland County, New York, and now resides in New Jersey with her husband and son. Although Rebecca loves to text, amazingly, she and her husband of ten years have never once sent each other a text message.

Texting Tyler looks great, Thanks for the giveaway!
christiane_dude@hotmail.com
@Gurlonthemove93

Thank u! This was such a fun start to my book tour!! I'm so happy u were the first stop! :) Rebecca

Thanks for the chance!

Thanks for the giveaway! Looks good!