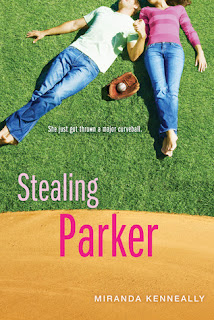 Descirption:
Red-hot author Miranda Kenneally hits one out of the park in this return to Catching Jordan's Hundred Oaks High.

After her family's scandal rocks their conservative small town, 17-year-old Parker Shelton goes overboard trying to prove that she won't turn out like her mother: a lesbian. The all-star third-baseman quits the softball team, drops 20 pounds and starts making out with guys--a lot. But hitting on the hot new assistant baseball coach might be taking it a step too far...especially when he starts flirting back.

Review:
Miranda Kenneally really has a great way of combining first love, sports and just an overall enjoyable reading experience.  This is a companion to Catching Jordon, not with the same characters but still in the same setting.  I was very excited to be reading this book because I loved Catching Jordan so much.

We meet Parker who is at odds with herself and how she wants to be portrayed by other people in her high school, especially after the scandal of her mother coming out and leaving her family for the church secretary. Parker was a major softball player it was her love and her passion but she didn't want to appear butch and have everyone think she was like her mother, with this in mind she made it a habit of hooking up with random people.  Never anything too heavy just make out sessions.  Her best friend Drew decides to sign her up to be an assistant on his baseball team pretty much just taking stats and making sure they have water. Little did she know there would be a new couch and one who would be so young and good looking.

Parker started hitting on Brian and even though he was six years older than her she really wanted that to happen, she felt as if he understood her.  All the while her best friend and Will aka Corndog was always around her.  Parker and Will start hanging out more and more and soon she starts to catch feelings for him because he feels so comfortable but she still has Brian on the back burner.

Throughout the book there is a lot of talk about Christianity and what it means to be a Christian.  I have mixed feelings about this and it seems that the people in her church are very narrow minded and not good people at all.  Makes me so mad the way they act and how they are holier than thou with their actions when they aren't Innocent themselves.  After all it's not very Christian to judge people as much as they do.  It's all very upsetting.

Things progress with both Will and Brian and Parker has to choose which is the best avenue for her.  It's a very sweet story and I enjoyed it very much.  Can't wait to see what Kenneally comes up with next.  Definitely a book you should check out, and even though Catching Jordan isn't really necessary to read I would suggest reading it first just because it's a great book.
Posted by Cathy De Los Santos at 5:58 PM