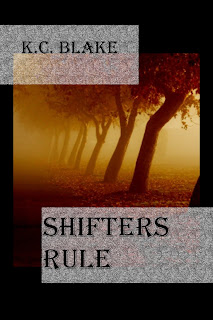 
Scavenger Hunt: Are you a good hunter? Let's find out.

How to play: Read 'my' version of The Three Bears and find the eight Halloween words embedded in the story. For instance, witch. Write these words down and email them to me at authorkcblake@blogspot.com.  If you are one of the first ten to do this, you will win free digital copies of Vampires Rule and Werewolves Rule. Now, to be fair, Vampires Rule is already free at Smashwords. So even if you don't win both books, you can download that one for free. Go ahead and tell all your book-loving friends.

What is Vampires Rule about? Jack has always beat the odds... at least until now. When he was attacked by a werewolf, vampires saved him. When he got tired of living the vampire life, another werewolf attack freed him, making him human again. Now Jack just wants to live a normal life, but what's normal about a hunter girlfriend, a brother who wants to stake him to be on the safe side, and a head werewolf building an army to rule the world?

Are you sick of vampires? Don't worry. This book has a new hook and a new mythology for the creatures. 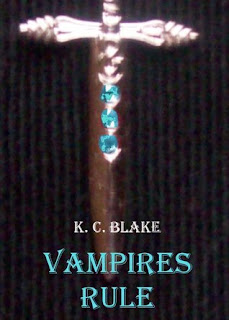 Why am I doing this? Shifters Rule (the third book) is being released today, October 31rst, 2012. Don't miss out on a cool series filled with vampires, werewolves, ghosts, and hunters.

Once upon a time there were bears. There was a mama bear, a papa bear, and a baby bear. Mama bear made porridge for breakfast, and they all sat down to eat. Papa Bear said, “My porridge is too hot.” Mama Bear said, “My pumpkin is too cold.” Baby Bear didn’t even try his because he wanted pancakes. Papa Bear thought they should take a walk while his porridge cooled. So they did.

While they were gone, a young girl named Goldilocks stumbled upon their cabin. The door was open so she went inside. She tried the porridge. One was too hot. One was too cold. But the third was just right. She ate until it was gone.

Next, she went to the living room to watch some television. She sat in one chair after another. One was too big. One was too narrow. The last one was just creepy, but it broke when she tried to sit on it.

She was tired, so she went upstairs to find a bed. There were three skeletons in the bedroom. The first bed was too hard. The second was too soft. But the last one was just right. She fell asleep.

Goldilocks woke up then. She saw the three ghosts and jumped out the nearest window. The scare taught her a lesson, and she never again went into a home without an invitation.
Posted by Cathy De Los Santos at 3:30 AM