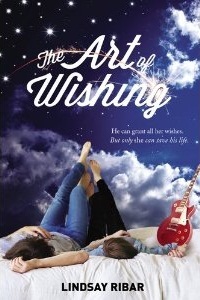 Description:
He can grant her wishes, but only she can save his life.


Margo McKenna has a plan of attack for everything, from landing the lead in her high school musical to dealing with her increasingly absent parents. But when she finds herself in possession of a genie's ring and the opportunity to make three wishes, she doesn't know what to do. Especially since Oliver—not blue-skinned, not bottle-dwelling, but a genie nonetheless—can see more than what she's willing to show him. With one peek into her mind, he can see the wishes that even Margo herself doesn't know she wants.

But Oliver comes with more than just mind-reading abilities, a flair for magic, and the prettiest eyes Margo's ever seen. Someone from his past is hunting him—someone bent on killing him, along with all the other genies in the world, for the sake of honor. And as Margo soon discovers, it will take more than three wishes to save him.

Doesn't this sound like such a cute book.  I haven't read anything about Genies since oh I don't know Aladdin maybe haha.
Posted by Cathy De Los Santos at 12:00 AM

Genies? I don't think I've ever read anything about them, so this sounds great! :D

This one sounds so captivating....enjoy!

I'm really looking forward to this one too. The cover is amazing. Thanks for sharing.