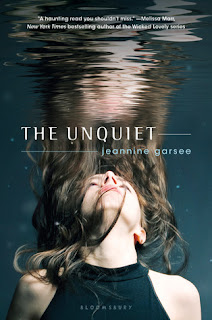 
After a suicide attempt, and now her parents' separation, Rinn and her mom move from California to the rural Ohio town where her mother grew up. Back on her medications (again!) and hoping to stay well, Rinn settles into her new home and school. She refuses to be daunted by the fact that the previous owner hanged herself in Rinn's bedroom, or that her classmates believe the school pool is haunted by Annaliese, a girl who drowned there. But when a reckless séance goes awry, and terrible things start happening to her new friends—yet not to her—Rinn is determined to find out why she can’t be "touched" by Annaliese...or if Annaliese even exists.

Annaliese? Or herself?
Posted by Cathy De Los Santos at 7:56 AM

The cover looks amazing. As for the story, I'm on a contemporary streak recently and this definitely piqued my interest!

I have been waiting for this also. I can't wait to read it.
Waiting For Wentworth

This has been on my to-read list for quite a while now and I can't wait to get my hands on a copy of this. Awesome pick! :)