Review: Getting Over Garrett 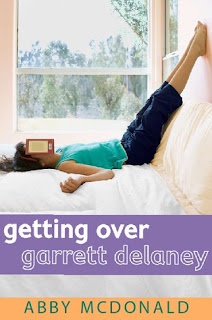 Getting over Garrett Delaney
By Abby McDonald
Release Date: January 24, 2012

Description:
Can a twelve-step program help Sadie kick her unrequited crush for good? Abby McDonald serves up her trademark wit and wisdom in a hilarious new novel.

Seventeen-year-old Sadie is in love: epic, heartfelt, and utterly one-sided. The object of her obsession - ahem, affection - is her best friend, Garrett Delaney, who has been oblivious to Sadie's feelings ever since he sauntered into her life and wowed her with his passion for Proust (not to mention his deep-blue eyes). For two long, painful years, Sadie has been Garrett's constant companion, sharing his taste in everything from tragic Russian literature to art films to '80s indie rock -

all to no avail. But when Garrett leaves for a summer literary retreat, Sadie is sure that the absence will make his heart grow fonder - until he calls to say he's fallen in love. With some other girl! A heartbroken Sadie realizes that she's finally had enough. It's time for total Garrett detox! Aided by a barista job, an eclectic crew of new friends (including the hunky chef, Josh), and a customized self help guide, Sadie embarks on a summer of personal reinvention full of laughter, mortifying meltdowns, and a double shot of love.

Review:
Sadie is in love with her best friend Garrett, she would do anything for him, even listen to him go on and on about his girlfriends, or even mope around with him about his breakups. But Garrett doesn't see Sadie in the same way that she sees him. That is until the end of the school year party and Sadie is so POSITIVE that Garrett is about to tell her how he really felt about her but a cluster of mishaps prevent that from happening. Before you know it, Garrett is off to Literary Camp for the summer (that Sadie didn't get into because she didn't meet the age requirements) and Sadie is left alone to fend for herself, pining after Garrett and the constant thought of what was he going to say?

Eventually Sadie has to get a job, so she starts working at Totally Wired the coffee shop that she and Garrett usually hang out at. Here we meet a really great cast of characters that I can one hundred percent picture in my mind. You have Dominique the French girl who is studying to be a lawyer and is very all high and mighty about herself. Then there is Lu Ann who is the carefree spirit with her own style. Aiko the artist who doesn't know where she wants to go or what to do. Josh the cook in the back who everyone loves. And let's not forget Kayla who doesn't work at the shop but is Sadie's next door neighbor, and they used to be really great friends pre-Garrett.

After a few conversations with Garrett, Sadie finally realizes he's just not into her like that, now she needs to come up with a plan. 12 steps to get over Garrett. With the help of her coworkers (now really great friends), she knows she can over come this. Throughout her whole 12 step program she realizes the things she has done and the way she has lost the person she used to be. It amazes me to see how much woman change for the person they love. It gets so bad we can lose our own identity and this is what happened to Sadie. Slowly she is learning new things about her self, things she thought she didn't like and she's just willing to try anything new.

It's a very girl empowering book in that it shows you how much you do not need to change for a guy. You may be doing it and not even realize it. This is a really great book.
Posted by Cathy De Los Santos at 1:52 PM

Good review! I was on the fence about this book because I have read some of Abby's books before and did not like them but I might have to check it out.