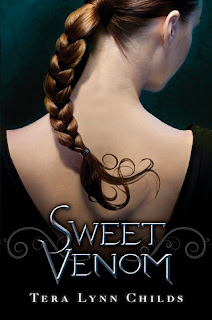 Description:
Grace just moved to San Francisco and is excited to start over at a new school. The change is full of fresh possibilities, but it’s also a tiny bit scary. It gets scarier when a minotaur walks in the door. And even more shocking when a girl who looks just like her shows up to fight the monster.

Gretchen is tired of monsters pulling her out into the wee hours, especially on a school night, but what can she do? Sending the minotaur back to his bleak home is just another notch on her combat belt. She never expected to run into this girl who could be her double, though.

Greer has her life pretty well put together, thank you very much. But that all tilts sideways when two girls who look eerily like her appear on her doorstep and claim they're triplets, supernatural descendants of some hideous creature from Greek myth, destined to spend their lives hunting monsters.

These three teenage descendants of Medusa, the once-beautiful gorgon maligned by myth, must reunite and embrace their fates in this unique paranormal world where monsters lurk in plain sight

Review:
We got it all wrong, Medusa was not a beautiful woman with snakes as hair who with one look would turn men to stone.  No, Medusa was the protector of the gate.  The gate that would let in mythical creatures into the real world, it was Medusa's job to protect humans from these creatures. But Athena being angry at Medusa for trying to steal Poseidon turned her story all around.

First we meet Gretchen who already knows she is a direct descendant of Medusa and has the sight.  With the help of Ursala she trains and learns where and how to bite the mythical creatures to send them back to where they belong before they can hurt any humans.  Gretchen is tough and strong, a take no kind of crap kind of girl.  I really love the confidence she has and she is not afraid to show it.  Nick is a boy from school who despite Gretchen constantly tell him to go away he will just not give up on her.  It's kind of sweet really.

Grace just moved to San Francisco and is completely lost.  She's very innocent and Green in that she is a vegetarian and very earthy.  She's the sweet one who just wants everyone to get along.  She doesn't have as much confidence which is evident in the beginning when she starts at Alpha and Miranda (the mean girl at school) starts to bully her she just can't find it in her to stand up for herself.  Thane is her brother, he too is adopted, he comes home one day with his friend Milo.  Immediately Grace falls head over heels for him, it's a cute side romance in the book.  One night they decide to go to a club and that is where she accidentally meets Gretchen.  They discover at the end of the night that they were both adopted and are indeed sisters, how can you deny it when they are identical.  With this meeting Grace now sees the mythological creatures too and she begins to train with Gretchen.  During this training she starts to study about themselves in the library that Gretchen has in her loft.  In one particular book she reads that there are always three sisters, they are really triplets.  She hacks into the adoption site and find Greer.

Greer is as perfect as can be, with parents who are always working or going to charity parties, either way they are never around.  She has her fancy clothes and shoes and her snobby attitude, that is until Greer and Gretchen show up on her doorstep and announce that they are triplets and direct descendants from Medusa destined to fight the mythological creatures that come into their realm.  Well first of all Greer didn't even know she was adopted, and of course didn't realize she had sisters or that she could see monsters.  She did have one experience when she was younger, but dismissed it.  Now she sees them everywhere.

The girls have a fight because Greer doesn't want to ruin her life with this responsibility, Gretchen is just pig headed and stubborn and Grace is trying hard to get everyone together.  In the end they are all attacked separately and this brings them all together as right now there is a bounty on them, any huntress that is caught (dead or alive) that monster will receive their freedom to run around their realm as they wish.

The end of the book leads you with many questions, such as who bombed Gretchen place, who planned the simultaneous attach on all three of them and of course who called Gretchen to warn her to get out of her loft in time before it exploded.  I have my suspicions but I guess I will have to wait for the next book to find out.  Loved this book!


Looking around the table, though, I can't help but worry that maybe we are.  One is gruff, tough commando chick, who dresses in black and drab and prefers to fight alone.  Another is pretty, preppy, popular girl, who wears the finest fashions and prefers to keep her social calendar intact.

And then there's me.  What type am I exactly?  The eco-conscious computer geek who'd rather be comfortable than fashionable and who is still learning how to stand up for herself.  On the surface we don't have much to bond about.