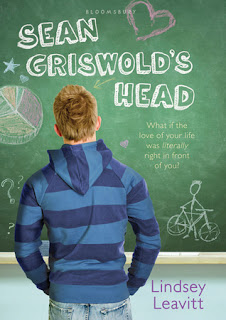 Description:
According to her guidance counselor, fifteen-year-old Payton Gritas needs a focus object-an item to concentrate her emotions on. It's supposed to be something inanimate, but Payton decides to use the thing she stares at during class: Sean Griswold's head. They've been linked since third grade (Griswold-Gritas-it's an alphabetical order thing), but she's never really known him.

The focus object is intended to help Payton deal with her father's newly diagnosed multiple sclerosis. And it's working. With the help of her boy-crazy best friend Jac, Payton starts stalking-er, focusing on-Sean Griswold . . . all of him! He's cute, he shares her Seinfeld obsession (nobody else gets it!) and he may have a secret or two of his own.

Review:
How adorable was this book.  I would have finished it all in one day if I hadn't started reading it so late in the day.  I couldn't put it down, Payton was such a great character and completely relateable.  I know when I have to face things I don't want to, sometimes I will choose to be angry or run in the other direction, which is exactly what she did. (Sometimes I just take it out on other people too, she did that as well)

Payton has just accidentally walked in on her mom giving her father a shot in the buttocks, of course she's shocked and confused as to what could be going on.  Turns out her father has MS (Multiple Sclerosis -which affects the ability of nerve cells in the brain and spinal cord to communicate with each other, effectively.) This of course is a very serious disease as it is very degenerative to the person, making them tired and run down.  Payton is scared.  She runs.  She starts doing bad in school and starts seeing the school counselor.  Which gives her one task to help her cope with the mess that is her life - find a focus object.

They've been in the same classes forever and anytime they have to sit alphabetically chances are he is always in front of her.  But she's never really noticed him, until he becomes her focus object.  It gets to the point where even her best friend Jac is on a mission to try and find out more about Sean for the sake of Payton's mission of a focal object.  Every day they learn a little more about Sean, and his habits.

He's a big rider, and because of this Payton decides that she can bike ride to.  She starts out just for fun to be around him (after all he's her focus object and she needs something to focus herself off of thinking about her father).  Turns out that Sean is probably the best thing that could have happened to her.  She learns things about herself that she didn't know she could do.  She feels comfortable with Sean and feels that he's easy to open up to.  Even talking about her father.  They even decide to do an MS Bikeathon in honor of her father.

It's all a very great story about discovering yourself, what you are capable of and of course learning to deal with tough situations when you just aren't ready to.  Really great read and very much recommended.
Posted by Cathy De Los Santos at 3:07 PM

This sounds really good, I am adding to TBR. Thanks for review.
Brandi from Blkosiner’s Book Blog