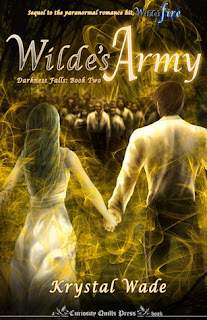 
Those two words spark fear in Katriona Wilde and give way to an unlikely partnership with Perth, the man she’s been traded to marry for a favor. Saving her true love and protector Arland, her family, and their soldiers keeps her motivated, but the at-odds duo soon realizes trust is something that comes and goes with each breath of Encardia’s rotting, stagnant air. The moment when concern for her missing sister spirals out of control, all thoughts of trust are pushed aside and she finds herself trapped by the daemon tricks Perth warned her of.

However, rescuing those she loves is only half the problem.

Kate still must get to Willow Falls, unite her clashing people, and form an army prepared to fight in order to defeat Darkness. When so many she’s grown fond of die along the journey, her ability to play by the gods’ rules is tested.

How will she make allies when the world appears stacked against her? And will she still be Katriona Wilde, the girl with fire?
Posted by Cathy De Los Santos at 6:00 AM

Huh. very intriguing :O Hadn't heard of this one but it's going on my tbr list :)

This is really awesome. I finished reading it few days ago and it's really good. Great pick! ^^
Thanks for dropping by!

This seems really interesting. Check out mine.

This sounds really good! Haven't heard of it before but I'll definitely have to check it out.

I hadn't heard of this series before, so I'll have to check out the first book. Great choice!

Oh wow, I'll be reading Wilde's Fire soon for a tour. I didn't know the series had so many books. Thanks for sharing and for dropping by.

Haven't heard of this one either! But it sounds pretty interesting!

Thanks for visiting my blog!

A new to me series that sounds good!

Emily @ Falling For YA said...

I haven't heard of this series before but the blurb sounds great, I will have to check it out!

I have never heard of this book but it sounds really interesting and quite intriguing. I will be checking it out, thank you! :)
xx

I read book one of this series a couple of weeks ago, but the writing didn't 'fit' me. I hope you enjoy it. It's over at Netgalley :)

Thanks for stopping by my WOW!

Haven't heard of this one before, but it sounds great!

Sounds interesting! I am not sure what to make of the cover. Can't tell if I love it or hate it. But either way, the plot has me intrigued. Thanks for stopping by my WoW.