Review: Where She Went 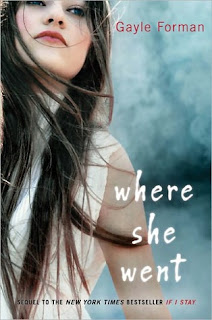 Where She Went
By Gayle Forman
Release Date: April 5, 2011
Series: If I Stay

Now living on opposite coasts, Mia is Juilliard's rising star and Adam is LA tabloid fodder, thanks to his new rock star status and celebrity girlfriend. When Adam gets stuck in New York by himself, chance brings the couple together again, for one last night. As they explore the city that has become Mia's home, Adam and Mia revisit the past and open their hearts to the future-and each other.

Told from Adam's point of view in the spare, lyrical prose that defined If I Stay, Where She Went explores the devastation of grief, the promise of new hope, and the flame of rekindled romance.
Review:
I didn't think it would be possible for this story to be better than the forest book but it succeeded. The story told through Adams point of view was perfect.  We meet up with Adam three years after the accident and the heartache he has been through is breathtaking.

Mia left him at the airport on her way to ny and never came back and he just couldn't understand why.  The love they shared was so strong, it was the forever kind of love.  During his devastation he left the group to work a regular job and one year later he just broke, something inside him just broke out, he started writing songs bought it back to the group.  They got back together got signed and became famous, but still he was not happy. He was just going through the motions and alienating himself from his bandmates.

Two days before he was to leave to London a reporter sets him off asking questions about the past, all things he hadn't gotten over yet. He decides to stay in ny longer. Walking the streets he sees a poster for a concert starring mia decides to go just to hear her.

They end up meeting after and all emotions break out by the end of the night. Truths come out and they realize they were both angry about a lot of things.

This book was am emotional rollercoaster I felt for them both through out the whole book. The first book was super sad but this one had heart and story behind it.  It was beautiful. Sometimes that saying about letting things hi and it coming back to you if it was meant to be is.do very true sometimes and it is a beautiful thing.

Cover:
It's pretty, it really is but I would not have minded being able to see the authors vision of what Adam looked like.  That would have been a really interesting cover.  We need more with men on them not just pretty girls, in pretty dresses which is the norm now (I know a lot of bloggers are out there saying that and I completely agree maybe the more people who say it the more people in the book industry will listen).
Posted by Cathy De Los Santos at 8:17 PM