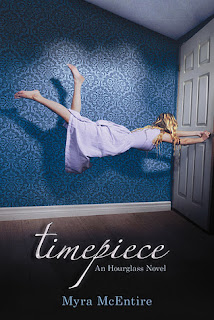 Description:
A threat from the past could destroy the future. And the clock is ticking...


Kaleb Ballard's relentless flirting is interrupted when Jack Landers, the man who tried to murder his father, timeslips in and attacks before disappearing just as quickly. But Kaleb has never before been able to see time travelers, unlike many of his friends associated with the mysterious Hourglass organization. Are Kaleb's powers expanding, or is something very wrong?

Then the Hourglass is issued an ultimatum. Either they find Jack and the research he's stolen on the time gene, or time will be altered with devastating results.

Now Kaleb, Emerson, Michael, and the other Hourglass recruits have no choice but to use their unusual powers to find Jack. But where do they even start? And when? And even if they succeed, it may not be enough...

Review:
We are back in the world of Time.  Where some can see forward some can see in the past and all you have to do is touch the rip to make it dissolve.  I faintly remember what happened in the first book but as I read further into this I remembered more details.  This was an interesting read and it's an interesting concept with the time line continuum going out of sorts.

This time the main character is not Emerson but Kaleb and I have always loved when I'm reading from a male perspective because it's not something you get to do too often.  He is a flirt with a love of liquor to numb his pain.  His mother is in a coma, his father just came back from being dead and still he trusts Michael more than him.  He's wallowing in his own sorrows and that's when he meets Lily.  The same night he meets her Poe comes back and gives him an ultimatum.  Find Jack or pretty much everyone dies.

Meanwhile Jack keeps appearing in the most random places seconds at a time.  They have tried time and time again to catch him but they have yet to be successful.  The hourglass goes into full discovery mode as they go to Jack's original location to find more information on him, if he hasn't wiped every one's memory that is.  But here is where they learn more truths about Chronos and the hourglass.  What's really going on?  Can they save the world from being one giant time rip?

Lily is finally comfortable using her special abilities and the bond between her and Kaleb grow quite strong.  It's all actually very sweet, I want to pull for them to be together where as Emerson and Michael I just want them to I don't know they are just to blah for me, maybe it's because they are tooo lovey dovey and it annoys me.  But Kaleb and Lily they are like you know I don't like you but I'm sorta in love with you.  I love that.

There is a lot of growth in this book for Kaleb.  With his family and his personal life, emotions are explored and dealt with.  He learns more and more about himself with each chance meeting he has with Jack.  They are more similar than Kaleb ever thought they could be.  He already knew he could take people's pain away but now he realizes thanks to Jack that he can also put memories back.  Will his family finally be back together the way they are supposed to be?

So now they continue on this mission to find the infinity glass which they believe can fix everything the way it's supposed to be, but they still don't know what the consequences of that will be or who will find it first.

The next book in the series comes out next year and I don't know who's POV it will be but I hope it's someone good, maybe it will be Jack, could you imagine!

I received this book from NetGalley and Egmont USA, so that I may give my honest opinion and a review. Whether it is good or not please do not let it discourage you from purchasing/reading the book yourself and forming your own opinion. What might be good for me may not be good for you and vice versa. With that said, Happy Reading Everyone!!!
Posted by Cathy De Los Santos at 10:26 AM