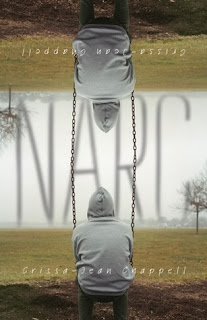 Description:
"You're going to hate me forever when you learn my secret."
Seventeen-year-old stoner Aaron Foster was offered a choice: go to jail or turn undercover narc to find the dealer who's funneling drugs into Miami's Palm Hammock High School. But Aaron has never been good at getting close to people. He's human wallpaper, a stoner wastecase who's obsessed with video games and street magic.

With a cop from Narcotics breathing down his neck, Aaron gets himself invited to parties where the deals go down. To get close to the school's biggest players, Aaron lies to everyone--most of all, the cute but troubled Morgan Baskin. With the Everglades party on Halloween night--and a planned drug bust there--just days away, Aaron realizes that he's falling hard for Morgan . . . and trying to protect her could cost him everything.
Posted by Unknown at 6:00 AM

I haven't seen this book before! It sounds a bit like "Wake" (whithout the paranormal aspect). I'll add it to my TBR list, thanks for sharing!

Definitely interested in this book, hadn't heard of it before, but it looks awesome! Great pick this week :)

That is either going to be really good, or really bad, lol. I hope really good! I hope it is pulled off nicely. I have never read anything from that author.

I love books about people going undercover! This sounds really good. It does sound kind of like Wake but without being able to slip into peoples dreams. I wonder if he will protect the girl?! Thanks for visiting My WOW!

This is my first time seeing this book, but I must say it's intriguing! Thanks for sharing :)

My friend JUST picked up a copy at BEA and, while I can't say that it's my type of read, I do think it sounds really great. Hopefully you enjoy it when you get your hands on it! :)

This look good. Thanks for sharing and stopping at my WoW.

i haven't heard of this before but i looks and sounds interesting. i'm gonna look more into it.

My WoW this week.

Great pick! I haven't heard of this yet but it sounds good. It also sounds just like a book I would enjoy so I'm definitely going to add it to my list. It kind of reminds me a bit of 21 Jump Street maybe.

Thanks for stopping by my post!
Traci @ The Reading Geek

I've never heard of this but it sounds really good, it's definitely getting added to my wishlist, thanks for stopping by!

ohhhhhhhhhh this book looks so good! Can't believe I have not heard of it before! Thank you so much for sharing :-) Definitely adding this one to my tbr list!!!

Following your blog! Feel free to visit mine!
SeeitORreadit

This book is new to me so thanks for sharing. Sounds interesting and I like reading books from a male protagonist perspective every now and then.
Thanks for stopping by my blog :)

Thanks for visiting my blog <3

I haven't read Wake so this is totally, completely new to me! It sounds good, nice and moody.

Thanks for sharing (and congratulations on picking a book almost no one has heard of - that's a rare thing!) lol

P.S. not sure if you know this or not, but you have captcha on and that is really bothersome to a lot of people. I for one have a hard time figuring out the letters/numbers. I know a lot of people also avoid going back to blogs with captcha because it's too much work for commenting. :D

Just a friendly suggestion; you really don't need it since blogger has a pretty good spam filter!

I'm totally looking forward to starting this one. Great pick! It should be a pretty good read :) Happy reading!

This book sounds really interesting, I will have to keep an eye out for it. Great pick!

This one sounds so different. I'm looking forward to seeing reviews on it.

Ooh this sounds interesting. I'm definitely adding it to my TBR pile. Thanks for sharing!

Looking forward to a UK release.

I haven't heard of this before but it sounds pretty good! Thanks for sharing and stopping by my blog :)

Sounds like a wonderful contemporary novel! Must check it out! Great WoW!Thanks for stopping by! Happy reading!

I haven't heard of this one yet. Nice pick!

Thanks for stopping by!