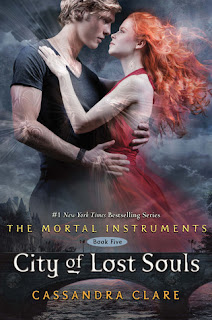 Description:
The demon Lilith has been destroyed and Jace has been freed from her captivity. But when the Shadowhunters arrive to rescue him, they find only blood and broken glass. Not only is the boy Clary loves missing–but so is the boy she hates, Sebastian, the son of her father Valentine: a son determined to succeed where their father failed, and bring the Shadowhunters to their knees.


No magic the Clave can summon can locate either boy, but Jace cannot stay away—not from Clary. When they meet again Clary discovers the horror Lilith’s dying magic has wrought—Jace is no longer the boy she loved. He and Sebastian are now bound to each other, and Jace has become what he most feared: a true servant of Valentine’s evil. The Clave is determined to destroy Sebastian, but there is no way to harm one boy without destroying the other. Will the Shadowhunters hesitate to kill one of their own?

Only a small band of Clary and Jace’s friends and family believe that Jace can still be saved — and that the fate of the Shadowhunters’ future may hinge on that salvation. They must defy the Clave and strike out on their own. Alec, Magnus, Simon and Isabelle must work together to save Jace: bargaining with the sinister Faerie Queen, contemplating deals with demons, and turning at last to the Iron Sisters, the reclusive and merciless weapons makers for the Shadowhunters, who tell them that no weapon on this earth can sever the bond between Sebastian and Jace. Their only chance of cutting Jace free is to challenge Heaven and Hell — a risk that could claim any, or all, of their lives.

And they must do it without Clary. For Clary has gone into the heart of darkness, to play a dangerous game utterly alone. The price of losing the game is not just her own life, but Jace’s soul. She’s willing to do anything for Jace, but can she even still trust him? Or is he truly lost? What price is too high to pay, even for love?

Review:
There was so much going on in this book.  It wasn't hard to follow but sometimes I wished they would put them together, it was almost like four stories in one.  Don't get me wrong I loved the first few books and I love Cassandra's writing and her mind is just fabulous.  but this book dragged a little for me.  I started it on the 11th and I just finished it.  It just didn't keep my interest as much as I wanted it to.  At least not until the end of the book.  And let's just say - I don't believe the series is over yet. Although I'm ready for a really great ending perhaps a wedding or something (and no I don't mean Luke and Jocelyn lol).

Anyway let's do a quick recap on what happened in the book with each character, so brief I won't spoil it, I semi promise lol.

Jace - as we left off in the last book he was missing, and so was Sebastian.  Turns out they are bound together where if one gets hurt the other bleeds etc etc.  Which is never a good thing because obviously everyone wants Jace to survive.  How will they break that bond? Will Clary and Jace finally be together, because really that's all we want.  I mean those moments in the first book when they thought they were related yes it was weird but darn it if they didn't belong together you know!

Sebastian - he is still evil. Ha.

Clary - she's fighting for her man.  She is one kick ass girl that's for sure.  She befriends Sebastian trying to make him believe that she is with them just to get close to Jace and get him back.  She has to constantly remind herself that this is not her Jace, this is the other Jace. My heart goes out to her for sure, but she can handle it.  Dealing with her brother is not an easy task.

Simon/Isabella They still haven't professed their love for each other, I don't know what they are waiting for but they are taking too long.  Although I think Isabelle is breaking down a little and letting Simon in, baby steps and all.  Simon yet again plays a major part in the ending and he's adorable and so very loyal.

Alec/Magnus: Alec is still hurting about Magnus being immortal and him growing old and not being with him forever.  I think Alec needs to grow up and appreciate what he has, until it's gone.

Overall:  This book was good but again it lagged a little.  I think there is toooo much story going on, maybe bring it back down to the main characters or where everyone is together and every other paragraph isn't about a different character in the book.  Focus :-) But alas I did like the book regardless because it is Cassandra Clare and it is the Mortal Instruments.  I can't wait to see what happens next and hope that Team Good prevails!

Cover: It's not my favorite really but that's probably because I still picture Jace with Dark hair in my mind LOL.  Although I've seen the cast for the movie - so far only for sure is Jace and Clary.  Tell me what you think, will they do the roles justice? Movie comes out next year!!!! I love it when great books become movies.

Can you picture it?

Have you read the book?  What did you think of it?
Posted by Cathy De Los Santos at 1:54 PM

Hopefully going to be reading this one soon, it's been a while since I have been immersed in the world of shadowhunters!