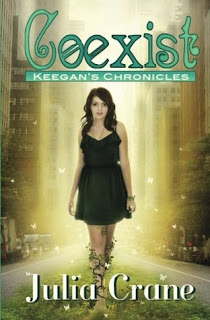 Description:
Sixteen-year-old Keegan is struggling to keep her huge secret from her friends--she's an elf, descended from a long line of elves that live in secrecy alongside humans. In elfin society, mates are predetermined but not allowed to meet until they are eighteen. Against tradition, Keegan's brother Thaddeus told her Rourk's name because his visions warned him she'd need Rourk's protection, especially since Keegan will play a key role in the coming war between the dark and light elves.

Rourk finds himself drawn to Keegan's side every time she thinks his name. He wants to talk to her but remains in the shadows, silently guarding her every time she mentally beckons him. A twist of fate thrusts the two of them together when Rourk is forced to step up his protection and make his presence known. An ancient prophecy deeply entwines Keegan's family and the future of their society. Somehow they must find a way to thwart fate and win the battle...without losing Keegan. With war brewing, and dark forces aligning, will Keegan and Rourk ever have the life together that they both desire?

This book was interesting.  Again I'm reading about elves - nothing wrong with that :-)

Imagine having a chosen one, someone you are going to be with your whole life.  All you can do is think about him now that your elf seer brother told you who it was, but then on top of that now you've met him early and you weren't supposed to meet until you're 18, what would you do?  On top of that the day of your seventeenth birthday is also the day of the great battle between the light elves and the dark elves.  That's a lot to put onto one persons shoulders.   How would you react to this whole situation?

Keegan is trying to live her everyday life as a normal person, even though she is an elf and because of this they are very secretive so no one knows about it, at least that's what Keegan believes.  There are other supernatural creatures out there and especially when Keegan goes people watching she likes to fantasize about what someone might be.  That is until one day she runs into a dark elf.  That's when her world is split open.  There is a war coming, and it will be the light against the dark elves.  Who will prevail?

Throughout the whole beginning of the book I've noticed that Keegan is just slightly self absorbed where as if it doesn't have anything to do with her she doesn't really pay it any mind, such as this great battle.  All she can think about is her warrior Rourk, who will be fighting in this battle and who she was able to meet even for a brief time.  But her actions during the war will decide the outcome of the battle, but of course she doesn't realize that because to her the battle hasn't really hit her yet.  That is until it literally hits her.

What happened to Keegan, has her seer brother's prophecy came true?  I will have to go on and read the next book now just so I know what happens next because my heart goes out to Rourk.  He's lived his whole life for this battle and for Keegan.  But he feels completely lost.  If you haven't read this book you should give it a shot.

Her eyes glanced frantically around trying to think a way out of this situation. How could this be happening, even with all my training? She was sure she could not defend herself against four guys. A drop of sweat fell from her face, and her heart was racing.

The biggest one pushed her up against the wall. She could smell the alcohol on his breath.

“Well, aren’t you a fine piece of meat?”

Glaring at him, she said, “Get your hands off me.”

Without thinking, she drove her knee into his groin. He groaned and doubled over. The others advanced, and the big one yelled, “She’s mine.”

She felt like she was going to throw up when his hands groped her chest. Please don’t do this, she thought. I belong to Rourk.

When she thought his name, it pierced through Rourk’s heart. Nothing mattered to him except keeping her safe. How dare anyone else lay their hands on her? He would make them pay.

Out of nowhere, Keegan felt her attacker pulled off of her. She looked up just as a flash of light went off, and what she saw made her heart drop; she felt as if she were in a free fall as she stared into the most beautiful face she’d ever seen. His grey eyes met hers and he tipped his head, giving her a slight nod.

Keegan whispered, Rourk? It was only a matter of seconds, but it felt like a lifetime.

He yelled over the crowd, “Go to the exit and text your friends to meet you.” His voice sounded like music to her ears; it was deep, but not too deep, and filled with authority.

As much as she hated to leave, she didn’t dare ignore him. She ran away.

Julia Crane is the author of the young adult paranormal fiction novels: Keegan's Chronicles, Mesmerized and Eternal Youth. Julia was greatly encouraged by her mother to read and use her imagination, and she’s believed in magical creatures since the day her grandmother first told her an Irish tale. Julia has traveled far and wide to all the places her grandmother told her about and more, gaining inspiration from her journeys to places like Nepal, Cyprus, Sri Lanka, Italy, France and many more. And who knows? Maybe the magical creatures she writes about are people she met along the way.


Julia Crane has a bachelors degree in criminal justice. Although she's spent most of her life on the US east coast, she currently lives in Dubai with her husband and three children.

*Disclosure of Material Connection: I am a member of Reading Addiction Blog Tours and a copy of this book was provided to me by the author. Although payment may have been received by Reading Addiction Blog Tours, no payment was received by me in exchange for this review. There was no obligation to write a positive review. All opinions expressed are entirely my own and may not necessarily agree with those of the author, publisher, publicist, or readers of this review. This disclosure is in accordance with the Federal Trade Commision’s 16 CFR, Part 255, Guides Concerning Use of Endorcements and Testimonials in Advertising*
Posted by Cathy De Los Santos at 6:00 AM

Thank you for hosting me on the blog tour!

Sounds like my kind of book!
Thank you for the giveaway!

This sounds like a really interesting type of book. I haven't read one about elves! Nice giveaway. (: