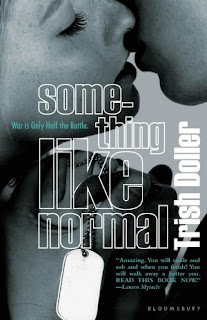 Something Like Normal
By: Trish Doller
Release Date: June 19, 2012

Description:
When Travis returns home from a stint in Afghanistan, his parents are splitting up, his brother’s stolen his girlfriend and his car, and he’s haunted by nightmares of his best friend’s death. It’s not until Travis runs into Harper, a girl he’s had a rocky relationship with since middle school, that life actually starts looking up. And as he and Harper see more of each other, he begins to pick his way through the minefield of family problems and post-traumatic stress to the possibility of a life that might resemble normal again. Travis’s dry sense of humor, and incredible sense of honor, make him an irresistible and eminently lovable hero.

Review:
You know when you're reading something and you literally can't put the book down, because if you do you won't be in that world anymore, the kind where you feel as if you are standing next to the characters playing out the scenes in the book?  That's how I felt, like I was there.  My heart goes out to all the characters.  Sometimes life is just not fair, and more for some than others.

I have friends that have enlisted in the military, whether it be marines or army and it's very true that something changes them there.  The reality of it all sometimes is so difficult that they can't handle it anymore.  From lack of sleep to quick reactions to someone waking them unnecessarily and anger and guilt built deep inside them because they are here and others are not.  It's a very real thing and I don't know how some of them do it.

That's exactly how Travis returns home.  Full of guilt that he lived and his best friend in the Marines did not.  He takes an extended leave as per his leader to help him get things together and deal with this loss.  He's back at home where his ex girlfriend is now dating his brother, his father is still an ass, his mother is neurotic but only because she loves him so much.  It just doesn't feel like home to him anymore, not after all the things he's seen in Afghanistan.  His attempt at normalness leads him to Harper.  Someone who really shouldn't forgive him but does.  Their relationship blossoms throughout the book and I have to say I just adore her.  She's sweet and caring and most of all understanding towards Travis and his tribulations.

We meet two other guys from his unit and I think you could literally write two more books on their lives (Trish, just saying hehe).  Each one is so different in their own way and that is exactly how the military is.  Each person can be so different but when they are together no one can stop them.  They too are dealing with the loss of their fellow man very differently.  Many people grieve differently it's just what they do.  Kevlar is all about the adrenaline and then there's the drinking, while Moss is used to people dying, he's just taking it easy.  Like Travis said, he must be one of the lucky ones, the one who doesn't have nightmares all the time.

There are some beautiful moments in this book and some very sad moments with just enough laugh out loud moments that the book became just perfect to me.  This book was more than I expected and just bought a great deal of thought into every day life in general.  You really shouldn't take anything for granted even if sometimes we just don't care.  You know that saying stop and smell the roses, you should do that today because you don't know if there will be a tomorrow.  And if you love someone tell them.  (Just my little after thoughts).

On the Characters: Travis is a strong, promising 19 year old who just came back from Afghanistan after seeing his best friend in his unit die in front of him, right now he's just struggling to find some normalcy.  Harper is a girl who knew Travis way back when, he even gave her the horrible reputation she didn't deserve but they get passed that.  Travis' mom is a strong woman who really is inspirational by the end, but she needs to take some chillax pills or something haha.  Ryan, his brother who stole his girlfriend, friends and even car is kind of a douche bag, but maybe he just doesn't want to live in his brother's shadow.  It can't be too easy for them. His father, an ex professional football player who wanted his first born to be as famous as he was, but Travis just doesn't want to live in his father's footsteps.

Overall: This was a really great book, and I would sit down and read it again right now just to make sure I didn't miss anything.  Travis is a hero in my heart, even if he doesn't believe it I think anyone in the military is a hero.  Go read this book, you just need to so you get a sense of what happens to those who serve and how to better deal with it, with lots of understanding and love.  You have no idea how much I just want to go hug Travis right now! Ha! Loved it!

I received this book from NetGalley and Bloomsbury Children's Books, so that I may give my honest opinion and a review. Whether it is good or not please do not let it discourage you from purchasing/reading the book yourself and forming your own opinion. What might be good for me may not be good for you and vice versa. With that said, Happy Reading Everyone!!!
Posted by Unknown at 8:19 AM

This sounds really good, and I don't usually read stuff like this. I may add it to the TBR to check it out!

Thank you for sharing this, I have friends who are in the military or are married to someone who is, I'll recommend this book to them.

I have been wanting to check this one out! I need to read more non paranormal books lol. Great Review!