From The Review Pile: Scars and the Goddess Legacy

Description:
Kendra, fifteen, hasn't felt safe since she began to recall devastating memories of childhood sexual abuse, especially because she still can't remember the most important detail-- her abuser's identity. Frightened, Kendra believes someone is always watching and following her, leaving menacing messages only she understands. If she lets her guard down even for a minute, it could cost Kendra her life. To relieve the pressure, Kendra cuts; aside from her brilliantly expressive artwork, it's her only way of coping. Since her own mother is too self-absorbed to hear her cries for help, Kendra finds support in others instead: from her therapist and her art teacher, from Sandy, the close family friend who encourages her artwork, and from Meghan, the classmate who's becoming a friend and maybe more. But the truth about Kendra's abuse is just waiting to explode, with startling unforeseen consequences. Scars is the unforgettable story of one girl's frightening path to the truth. 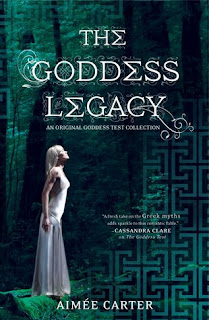 Description:
For millennia we've caught only glimpses of the lives and loves of the gods and goddesses on Olympus. Now Aimé e Carter pulls back the curtain on how they became the powerful, petty, loving and dangerous immortals that Kate Winters knows.


Calliope/Hera represented constancy and yet had a husband who never matched her faithfulness...

Ava/Aphrodite was the goddess of love and yet commitment was a totally different deal...

Persephone was urged to marry one man, yet longed for another...

Henry/Hades's solitary existence had grown too wearisome to continue. But meeting Kate Winters gave him a new hope...
Five original novellas of love, loss and longing and the will to survive throughout the ages

I've got The Goddess Legacy on my pile, too! I really liked the first book and the 2nd was okay. Hope this one lives up to my expectations. :)

Both sound good to me. Gotta check those out!