Review: The One That I Want 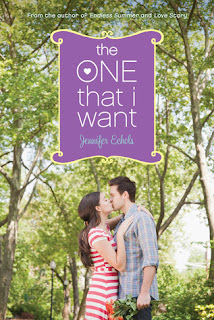 The One That I Want
By Jennifer Echols
Release Date: December 6, 2011

Description:
Gemma can’t believe her luck when the star football player starts flirting with her. Max is totally swoon-worthy, and even gets her quirky sense of humor. So when he asks out her so-called best friend Addison, Gemma’s heartbroken.


Then Addison pressures Gemma to join the date with one of Max’s friends. But the more time they all spend together, the harder Gemma falls for Max. She can’t help thinking that Max likes her back—it’s just too bad he’s already dating Addison. How can Gemma get the guy she wants without going after her best friend’s boyfriend?

Review:
Jennifer Echols has to be one of my favorite authors, I can't boast enough about on her on here.  Any chance I get I will mention her first book and make sure everyone knows about it.  This book did not disappoint either.  Her writing style and the story she tells keeps you captivated because you have to know what's going to happen next in the characters lives.  Let's get into the book a little.

Gemma seems like the kind of girl who doesn't believe in herself enough and her best friend Addison, which really I don't know why they are even friends doesn't encourage her only puts her down every chance she gets.  This irritates me because I hate it when people get run over like that over and over again.  They are both at Majorette camp when Gemma notices a boy (but it seems Addison happened to be looking at the same guy at the same time).  But he seemed to be noticing only one of them.  Addison pulls Gemma with her to go talk to the two guys (his friend is there with him now) and they end up grabbing something to eat.  Sure enough one thing leads to another and Gemma is told that Max (the one she likes) is going out with Addison but they all have to go out together on a double date since Addison's mom is so strict.  This is how the book begins.

Throughout the book you go out with the four of them and you just know that the balance is all wrong.  Gemma doesn't like Carter and Max doesn't like Addison.  They all try to make each other jealous and it's really quite ridiculous how much they each want the other's guy but won't voice the opinion.  In the end everything works out as it should be and discussions are had between all friends, conversations that should have happened a long time ago.  All in all the book was a great read and I already can't wait for the next one.  I know some people were complaining about this being an ebook version only - don't fret I believe the print out comes out next year on 2/7/12.  I will probably buy it because I have to have all her books in my collection.

Have you read this yet?  What did you think?
Posted by Cathy De Los Santos at 8:36 AM

I desperately want to read her book Such a Rush(It's not out yet)
I find her writing to be different!Loving the fact that they're all trying to make each other jealous(we all know THAT always ends well :P)