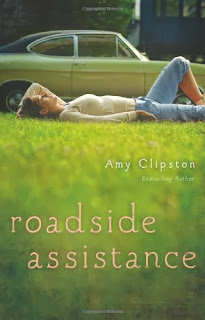 
Emily Curtis is used to dealing with her problems while under the hood of an old Chevy, but when her mom dies, Emily's world seems shaken beyond repair. Driven from home by hospital bills they can't pay, Emily and her dad move in with his wealthy sister, who intends to make her niece more feminine---in other words, just like Whitney, Emily's perfect cousin. But when Emily hears the engine of a 1970 Dodge Challenger, and sees the cute gear head, Zander, next door, things seem to be looking up.

But even working alongside Zander can't completely fix the hole in Emily's life. Ever since her mom died, Emily hasn't been able to pray, and no one---not even Zander---seems to understand. But sometimes the help you need can come from the person you least expect.

Review:
First let me start by saying that I don't normally read books like this but I received it in the mail and thought I would give it a try.

We meet Emily and her father, her mom had just passed away, they've lost everything and are now off to live with her aunt Darlene.  This is a complete shell shock for Emily because her Aunt and her family are wealthy where she has just always gotten by with her dad especially after her mom's cancer became more severe.  Off to a new school for a new start but throughout this whole thing she's lost the ability to speak to God.  She can't talk to him, she's lost her faith and with that she has lost herself.  Without her mom she is lost.  I can completely relate because I don't know what I would do without my mom.  Emily is also different in that while her cousin Whitney is a Cheerleader, a super girly girl and just a perfect person in Emily's eyes, Emily is just a girl who is different because she would rather work on cars than go to the mall.

The book was overall good but sometimes it got a little too churchy and preachy for me, but that's because I'm not a very religious person.  I do like the relationship that grew between Zander and Emily and how he helped her to find her way back to God and back into everyones life.  Even when life gets hard, things will only get better and you just have to move on.  It might not be what you want but it's what you have to do and with your faith you will always have that unspoken support from above.
Posted by Cathy De Los Santos at 9:27 PM

I have been wanting to read this for a long, long, loooong time. I put off getting it because I heard it had religion but recently, I read The Next Door Boys & There You'll Find Me which both get preachy & I liked both really well (especially There You'll Find Me, it's one of my new all time favorites) so I think I'll need to give this a go again. How bad can it be if you didn't completely hate it? haha