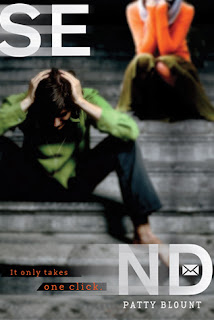 Description:
It’s been five years since I clicked Send.

Four years since I got out of juvie.
Three months since I changed my name.
Two minutes since I met Julie.
A second to change my life.

All Dan wants for his senior year is to be invisible. This is his last chance at a semi-normal life. Nobody here knows who he is. Or what he’s done. But on his first day at school, instead of turning away like everyone else, Dan breaks up a fight. Because Dan knows what it’s like to be terrorized by a bully—he used to be one.

Now the whole school thinks he’s some kind of hero—except Julie. She looks at him like she knows he has a secret. Like she knows his name isn’t really Daniel...

Review:
So this was definitely an interesting book, sort of what I thought it was going to be but then again not. Yes it's about bullying, but it's a lot about struggling with you and learning to forgive yourself and learning to move on. It's a complicated book but again interesting none the less.


We meet Dan and his alter ego Kenny (which is younger version of him); I'm thinking more like multiple personalities, due to trauma of being in the juvenile detention center. He walks into his first day at a new school under a new identity to two kids, one is being bullied and he debates if he should stop it or not. Of course his conscious gets the better of him and he goes and stops it. This is his theme throughout the book.

He went to jail because he simply hit send. But the reaction to that was a constant bullying towards the person whose picture he posted which eventually leads to his suicide. Racked with guilt Dan is on a mission to make sure no one gets bullied and is out to save Brandon from following in the same footsteps. During this time he is also faced with Julie, who is against helping those who need it but she has her reasons why. She's very on and off again with Dan, she likes him one minute and runs away the next, it's sort of confusing throughout the book but by the end everything is all tired together.

You see the different dynamic from the person who is being bullied, to the one doing the bullying, the one which went to jail for something in regards to bullying and the relative of a victim. Many different points of view but the moral is to always do the right thing because if you don't the consequences and the guilt is not worth it in the end. I know there have been many books about bullying lately and I wholeheartedly believe they need to be read, understood and followed. Because bullying is wrong on so many levels and affects so many people, it's just unnecessary. I completely believe in the zero tolerance rules but let's get real, even though that rule is in effect it's not always followed. People need to stop turning a blind eye to situations and take action.

Overall the book was good; the cover was okay but would have been better if he was at a beach, which was the favorite spot in the book. Hope you all get a chance to read and enjoy it.
Posted by Cathy De Los Santos at 12:09 PM

I love darker books like these! Better check the library if they have it.

P.S. We are hosting a New Adult giveaway hop, drop by if you're interested.