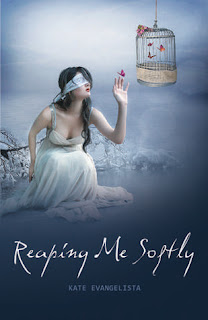 Description:
Ever since a near-death-experience on the operating table, seventeen-year-old Arianne Wilson can see dead people. Just as she’s learned to accept her new-found talents, she discovers that the boy she’s had a crush on since freshman year, Niko Clark, is a Reaper.

At last they have something in common, but that doesn’t mean life is getting any easier. All while facing merciless bullying from the most powerful girl in school, Arianne’s world is turned upside down after Niko accidentally reaps the soul of someone she loves. This sends them both into a spiral that threatens to end Arianne’s life. But will Niko break his own Reaper’s code to save her? And what would the consequences be if he did?


We meet Arianne who seems to be an outcast in school all because of one bully. She secretly watches Niko and wishes he would feel the same about her; she also has a best friend who anyone would be lucky to have. Ben seems like the most perfect guy, I don’t think he could really do anything wrong because he believes everything that comes out of Arianne’s mouth even the fact that she sees dead people. Ben is also in love with Carrie who is Arianne’s sister, but is also in the hospital very ill. They have their own sweet story throughout the book.

So one day in Chemistry (there must be something in Chemistry a lot of books bend towards that class for budding romances, I like the play on it, showing chemistry and them having chemistry) Niko has to sit with Arianne as partners and this is where their budding romance develops. He notices her for the first time and from there they just continue to grow their relationship. He shows her things that she’s never seen before and eventually tells her he is a reaper.

Being a reaper is not like being Death himself, you are underneath him and just follow his orders, sometimes his orders are not easy to do especially when you become involved with humans and this turns out to be true for Niko when a certificate has been put out on Adrianne. He defies Death and in turn is now being tortured. There’s only one way to save him but there are consequences but Arianne is ready to make those sacrifices.

I was so happy to find out this book was going to be a series when I read that ending, I just wanted more, I craved it because it wasn’t enough for me. This book was good and I can’t wait to read the next one.

Check out the other tour stops below:
:

Thank you so much for participating in the tour! *hugs*