Review: Being Friends with Boys 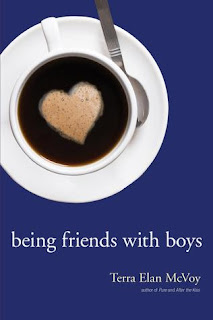 Being Friends with Boys
By: Terra Elan McVoy
Release Date: May 1, 2012

Description:
Charlotte and Oliver have been friends forever. She knows that he, Abe, and Trip consider her to be one of the guys, and she likes it that way. She likes being the friend who keeps them all together. Likes offering a girl's perspective on their love lives. Likes being the behind-the-scenes wordsmith who writes all the lyrics for the boys' band. Char has a house full of stepsisters and a past full of backstabbing (female) ex-best friends, so for her, being friends with boys is refreshingly drama-free...until it isn't any more.


When a new boy enters the scene and makes Char feel like, well, a total girl...and two of her other friends have a falling out that may or may not be related to one of them deciding he possibly wants to be more than friends with Char...being friends with all these boys suddenly becomes a lot more complicated.

Review:
This book has me up and down about it.  I like the fact that it was about musicians for some reason that always entertains me, maybe it's the song lyrics that they come up with.  On the other hand the main character was on and off for likability.  She seemed a little too pushover and completely lost, but I guess that's what you are in high school completely lost and trying to find yourself and that's exactly what Charlotte was trying to do.

When her band broke up she had to find new members with her best friend Oliver who seems very much the attention getter.  With this comes new crushes and new characters that I really enjoyed.  Such as Benji, who is in her history class and helps her get a passing grade.  It's adorable because he really seems to like her and I love that he is so laid back and cool like that.  Then there is Fabian, he seems to good to be true, which he turns out to be for Charlotte. They didn't mesh as well as she had hoped, but it works out in the end.

I know where I wanted to story to go and it kept taking a left turn when I wanted to take a right turn but I guess that's what made the book interesting.  You really didn't know what Charlotte was going to do next and at the end I think her epiphany and realization was just perfect.  Although I will say that I wanted more out of the ending, just extended it enough for more interaction but I get it.

Overall the story was good although a little scattered.  I really liked some characters and others just irritated me, especially her ex best friend, who is definitely a band wagon jumper.  Good teenager finding themselves kind of book with music thrown in for some good interesting story lines.  Enjoyed the book.
Posted by Cathy De Los Santos at 12:55 PM

I'm going to give this a shot. Great review! :)