Cover Reveal: Beyond the Veil by Quinn Loftis (Grey Wolves #5) 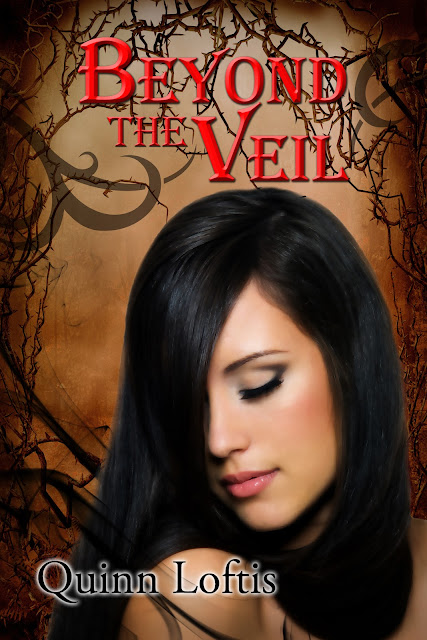 Beyond the Veil
By: Quinn Loftis
Series: The Grey Wolves

Description:
Though the Serbian pack has been brought to heel thanks to the downfall of their Alpha, the war is far from over.


Desdemona, a witch of unfathomable power, has escaped the wolves’ wrath, but she will not go quietly into the night. She takes refuge in a place where even the smallest sliver of light does not dare to enter. Though she had to flee, she has not given up on the treasure she wishes to acquire. Her depravity knows no bounds; she's even willing to search for the one who can assist her in opening a Veil that has not been opened in millennia – with good reason: the danger is incalculable.

Meanwhile, there are major changes rippling through the Romanian Grey wolves. Decebel has become Alpha to the Serbian pack in an effort to begin to unite the Canis lupis species. Their numbers are dwindling in the wake of the shortage of true mates and lack of offspring. The wolves are beginning to lose faith and darkness seems to be crashing in on them from all sides. But the winds of change are blowing, changes that will alter the future of not only the Canis lupis, but of another ancient race as well.

Amidst all of this, Sally is continuing to come to terms with her relationship with the playful, charming, flirty, unbelievably handsome bartender – who happens to be a member of the Romanian pack.

If all that weren’t enough, the Fates have decided to pay a little visit to Jen. It’s time to collect. She cheated the Fates of a life, her life. Now they want what they are due. The problem? It’s more than Jen is willing to pay.

Yes, the war is indeed far from over. Bargains will be struck, declarations will be made, sacrifices will be given, love will be tested, and trust will be questioned as evil makes its stand against them all.

Quinn is a 32 year old wife, mother, nurse, and writer, not necessarily in that order. She lives in beautiful North West Arkansas with her husband, son and Nora their Doberman pinscher. She loves writing, reading, and crocheting. Her favorite holiday is Christmas, favorite book(s) is Pride and Prejudice, The Alpha and Omega Series by Patricia Briggs, and the Harry Potter Series by J.K. Rowling. She loves to be silly and have fun, loves music and thinks there is no greater sound in the world than that of her little boy's laughter.

Posted by Cathy De Los Santos at 5:00 AM

I just love this cover! simple yet gorgeous >.< Thanks for the reveal!! :D I haven't read the series, have you? is it good?? :)

Omg this was the surprise Omg cant wait to read it! I like love the series!

I love the cover! I can't wait for this book! I LOVE this series. There is so much humor and love and friendship!!!