Review: While He Was Aay 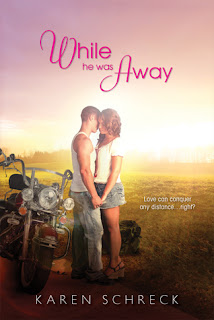 Description:
One year--he'll be gone for one year and then we'll be together again and everything will be back to the way it should be.


The day David left, I felt like my heart was breaking. Sure, any long-distance relationship is tough, but David was going to war--to fight, to protect, to put his life in danger. We can get through this, though. We'll talk, we'll email, we won't let anything come between us.

I can be on army girlfriend for one year. But will my sweet, soulful, funny David be the same person when he comes home? Will I? And what if he doesn't come home at all...?

Review:
After being together for a while, and having to survive being apart during OSUT (training) David and Penna are separated again by David being shipped off to Iraq.  Now is when the worry of him never returning plagues both Penna and David's mother.  This is the story of how Penna tries to deal the best way she can with the fact that they are yet again away from each other.  During the summer is when he leaves and it's worse for her because she has nothing to occupy her time with, until her mother insists she works at the restaurant with her.

Working at this restaurant leads to new things for Penna, such as new friendships formed.  The truth about her grandmother, and where and how she's doing.  It also opens Penna up to new possibilities that there are other things out there than just David.  Sure she misses him but life has to go on, as his is in Iraq.  I really enjoyed the new found relationship between Penna and her Grandmother, they have more in common than they know and it's a great friendship that grows between them, but her grandmother is in the early stages of Alzheimer's so they try and make due with the best they can.  Penna even reconciles her mom with her grandmother, that's always a good thing because you never want to know the what ifs later in life.

Overall the story was okay, I really wanted to like this book more than I did, but there was some lacking emotion between Penna and David, it seemed scripted with no substance.  I couldn't feel for them, and no it wasn't because they were apart it just never sat well with me.  And the ending it seems to stop so abruptly, maybe it was just to point out that life goes on and on, no matter what happens in your life or anyone else's.  Maybe things will work out for them in the end.  I don't really know but we'll just be kept guessing as to what really happened to David and Penna's relationship.
Posted by Cathy De Los Santos at 9:15 AM

That's the kind of contemporary fiction I have a hard time sinking into. Great Review!