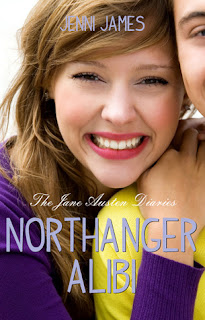 Description:
The Russo family and Seattle, WA are no match for Claire Hart and her savvy knowledge of all things vampire related. Thanks to her obsession with the Twilight series, if there is anyone who would know a vampire when she saw one, it's Claire. And she's positive totally hot Tony Russo is a vampire--she just has to prove it. In this modern retelling of Jane Austen's Northanger Abbey, follow Claire's hilarious journey on her first summer adventure away from home, where she learns everything isn't what it seems, and that in some instances, reality is way better than anything she'd ever find in a book.

Review:
Absolutely another amazingly sweet and adorable book written by Jenni James, I’m really enjoying the Jane Austen Diaries series, each one brings me a little bit more of joy. Who doesn’t know or love Jane Austen’s books or concepts and Jenni James has definitely done them justice. Putting her little twists on them and making them young and sweet. Makes me all giddy inside, yes I’m not kidding I said giddy.


Here we meet Claire on her way to Seattle with her much obsessed Twilight fascination. Claire is in hopes that on her summer vacation she will meet a vampire like Edward. Little did she know her wishful imagination seemed to be coming true for her. Especially when she meets Tony, he doesn’t eat, he seems to be reading her mind and she is convinced he is absolutely a vampire. Tony and his twin sister, along with Claire slowly start to become friends spending more and more time together. One day Claire goes out with Nora to the mall and is randomly kissed by the guy at Old Navy, Jayden. They hit it off but she’s still confused wanting to see what happens with Tony, but he's very convincing and they make a date for later.

She realizes that she doesn’t really like Jayden, then he tells her his last name and after their little argument in the car and she walked off, she faints. Yup, he said his name is Jayden Black and he is Native American (yeah I know you’ve guessed the tribe Twilight fans). She completely believes him to be a werewolf now. After this little incident she doesn’t’ really want to speak to Jayden but he’s persistent. All the while Tony starts to try and spend more time with her. Watching their love bloom is so sweet and innocent and makes me truly miss those days.

But Tony has a secret he can’t tell Claire which leads to a little bit of a dilemma. Eventually the truth comes out and somehow it all really works out the best way it can. Again this was super sweet and fun read that I was glad I picked up. The cover is cute, the girl really seems bubbly and adorable just like Claire, although I will say I wish I could see more of Tony.

Overall really great, quick, fun and easy read and I can’t wait to get my hands on the next book in this series. Thank you Jenni James for bringing a smile to my face with these wonderful books!
Posted by Cathy De Los Santos at 1:43 PM

I hadn't heard of these - I'll definitely have to look into them. Love anything Austen related!