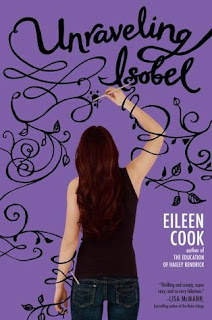 Description:
Isobel’s life is falling apart. Her mom just married some guy she met on the Internet only three months before, and is moving them to his sprawling, Gothic mansion off the coast of nowhere. Goodbye, best friend. Goodbye, social life. Hello, icky new stepfather, crunchy granola town, and unbelievably good-looking, officially off-limits stepbrother.


But on her first night in her new home, Isobel starts to fear that it isn’t only her life that’s unraveling—her sanity might be giving way too. Because either Isobel is losing her mind, just like her artist father did before her, or she’s seeing ghosts. Either way, Isobel’s fast on her way to being the talk of the town for all the wrong reasons.

Review:
I was captivated from the first the very beginning of this book, I didn’t want to put it down and was surprised at each corner. Sure there are times where I would guess something would happen and sometimes it did, but sometimes it didn’t. This book was just an overall must read. Especially if you like ghost stories, which to be honest I did not know this was a ghost story at all, yes I know it’s in the description and everything but I never read it, I just really liked the cover. It drew me in and I was happy I finally picked it up.


We meet Isobel who is on her way to moving into the middle of no where with her newly married mother and stepfather and the cute boy which she can’t touch because now he’s her stepbrother. There is obvious animosity all around from everyone and hence starts the roller coaster which is Isobel’s mind. The way she describes her stepfather is hilarious. I had to reread some things a couple times because I didn’t believe she would say that. Isobel and her mom don’t really get along but they are not at each other’s throats. She definitely does not like her knew step dad and still has reservations about Nathaniel, her new stepbrother, who is also very hot.

Her first night there she chooses the room of her stepdad’s dead daughter, of course thinking it’s just another room in her mind the best room. But then strange things start to happen. She starts to question her sanity but things just don’t seem to add up. When she starts her new school she befriends a girl or should I say Nicole bombarded Isobel with her friendship, all the while trying to get at Nathaniel. Isobel starts to do things she normally wouldn’t be interested in doing, such as cheer leading. By her step dads undeniable suggestion that perhaps Isobel is not right in the head and maybe needs to go to a facility. This edges her mom in the same direction, but of course Isobel doesn’t believe that she needs to go anywhere. 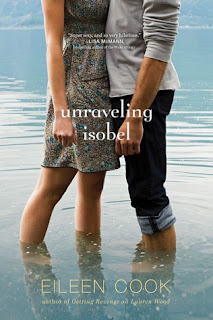 Things start to transpire and the only thing Isobel wants to do is take control. She goes on a hunt to find out what’s been really happening in this house since the beginning, she’s going on a ghost hunt to find out the truth. There were a lot of great things going on in this book and I really couldn’t put it down. I would stay up thinking about it, it even freaked me out a little. Let’s just say I happened to leave lights on that I wouldn’t before lol. But that’s good that I was so into the book that it left me thinking, I think that’s what all books should aspire to. To be remembered. I don’t believe I’ve read anything by this author before but I’m definitely intrigued to see what else she has out there.

I will say this I kind of like the other cover better, although I don't think either really represent what the book is about the most.  But this one I like just slightly better because if I saw this cover it would be one I would definitely pick up faster.
Posted by Cathy De Los Santos at 2:23 PM