Review: Where the Stars Still Shine by Trish Doller 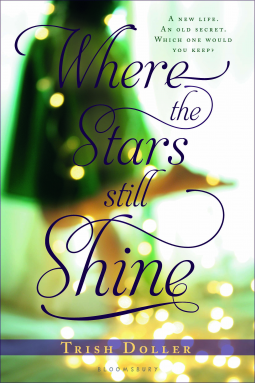 Where the Stars Still Shine
By: Trish Doller
Release Date: September 24, 2013
Description:
Happily-ever-after is never quite what you expect in this hot and gritty romance.Stolen as a child from her large and loving family, and on the run with her mom for more than ten years, Callie has only the barest idea of what normal life might be like. She’s never had a home, never gone to school, and has gotten most of her meals from Laundromat vending machines. Her dreams are haunted by memories she’d like to forget completely. But when Callie’s mom is finally arrested for kidnapping her, and Callie’s real dad whisks her back to what would have been her life, in a small town in Florida, Callie must find a way to leave the past behind. She must learn to be part of a family. And she must believe that love—even with someone who seems an improbable choice—is more than just a possibility.

Trish Doller writes incredibly real teens, and this searing story of love, betrayal, and how not to lose your mind will resonate with readers who want their stories gritty and utterly true.
Review:

You should definitely check this book out because it had so many different elements to it that you just have to read, and maybe even reread it to get all the tiny facts together.  It was amazingly written by Trish Doller (I’ve read her other book and thought it was wonderful as well) and it just flowed nicely.  The writing kept you addicted wanting to know what the characters were going to do next and it was all new and refreshing.


We meet Callie and her mother as they are on the run from being caught, because Callie’s mother kidnapped her and they have been trying to hide for the past ten years, until they get pulled over for a stupid tail light.  I’m not kidding when I say; people make sure you take care of those tail lights because it will get you every time.  Anyway so they return Callie back to her father’s custody and after being on her own with her mother for the past ten years it’s a difficult thing to get used to, stability.  It’s all very foreign to her and we go through her journey of learning to cope, making friends again, learning more about her family, and a very special relationship between two broken people.


Greg is Callie’s father and he tries his hardest to make her feel welcomed and give her all the things he couldn’t give her while she was with her mother and it’s sweet to see him try so hard, more fathers should be like that.  But let’s get to the new guy in her life – Alex.  He sounds like a true Greek God and a dreamboat that everyone wants, but for some reason he only has eyes for Callie.  She’s used to men treating her a certain way and only feeling certain things with them so she is definitely learning to cope with what seems to be an interesting relationship between the two.  But again this isn’t just about a boy; it’s about her relationship with everyone around her.


Throughout the book she is trying to adjust to her new lifestyle, her mother is released on bail from prison and goes looking for her.  Callie is torn between her new life and her old life not wanting to let anyone down.  Again I have to say you really do have to make yourself happy first.  Keeping the secret from her father that her mother has been visiting her is hard.  He trusts in her so much and she still continues to be torn in half.  Little things here and there tip Greg off but still she denies it that is until she can deny it no longer.  You would think things would blow up but they don’t because Greg is very understanding and Callie is just trying to find her way.


This was a very sweet, endearing story about someone that overcame her past and is moving on to a brighter future that she realizes she does deserve.  With new close family members and relationships on the horizon Callie learns to finally be free.


I really love the cover of this book too because the twinkle lights and her new dress just seem so refreshing from the typical covers that are out there today and I can’t give this book enough praise all around.

About the Author:
Trish Doller's debut novel, Something Like Normal, was one of the most anticipated titles of 2012, named an IndieBound New Voices Pick and a finalist for NPR’s Best Teen Books of All Time. She has been a newspaper reporter, radio personality and bookseller, and lives with her family in Fort Myers, Florida. www.trishdoller.com
Links - author site
Disclaimer:
I received this book from NetGalley and Bloomsbury USA Children's Books, so that I may give my honest opinion and a review. Whether it is good or not please do not let it discourage you from purchasing/reading the book yourself and forming your own opinion. What might be good for me may not be good for you and vice versa. With that said, Happy Reading Everyone!!!
Posted by Cathy De Los Santos at 1:25 PM