Review: There You'll Find Me 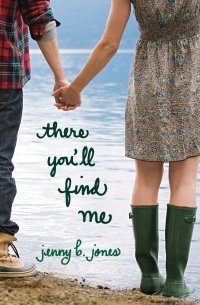 Finley Sinclair is not your typical eighteen-year-old. She's witty, tough, and driven. With an upcoming interview at the Manhattan music conservatory, Finley needs to compose her audition piece. But her creativity disappeared with the death of her older brother, Will.
She decides to study abroad in Ireland so she can...more Grief brought Finley to Ireland. Love will lead her home.

Finley Sinclair is not your typical eighteen-year-old. She's witty, tough, and driven. With an upcoming interview at the Manhattan music conservatory, Finley needs to compose her audition piece. But her creativity disappeared with the death of her older brother, Will.

She decides to study abroad in Ireland so she can follow Will's travel journal. It's the place he felt closest to God, and she's hopeful being there will help her make peace over losing him. So she agrees to an exchange program and boards the plane.

Beckett Rush, teen heartthrob and Hollywood bad boy, is flying to Ireland to finish filming his latest vampire movie. On the flight, he meets Finley. She's the one girl who seems immune to his charm. Undeterred, Beckett convinces her to be his assistant in exchange for his help as a tour guide.

Once in Ireland, Finley starts to break down. The loss of her brother and the pressure of school, her audition, and whatever it is that is happening between her and Beckett, leads her to a new and dangerous vice. When is God going to show up for her in this emerald paradise?

Then she experiences something that radically changes her perspective on life. Could it be God convincing her that everything she's been looking for has been with her all along?

Review:
So first let me say how much I love that I read this book and it's all thanks to Random Reads. If it wasn't for that random generator I probably wouldn't have picked this book up ever and what a Shame it would have been. This book was really heartfelt and addicting. My heart definitely wept for the main character and all the things she was going through. I especially loved that this book took place in a foreign county, those are always more exciting for some reason. Especially a place like Ireland with so much history and presence.


We meet Finley as she is starting a new school in Abbeyglen, Ireland for a year. She's still pretty much broken about her brother who passed away in a bombing, she doesn’t feel the same and believes that if she takes this trip it will bring him closer as well as helping her find God. She doesn't hear him anymore and that makes her even more scared. During this new adventure of hers she has her brother’s journal and is trying to retrace his steps by visiting each location he wrote about, after all he was a very faithful person and said he could hear God speaking to him at each location. This made her want to go even more especially since she was writing an audition piece for the NY Conservatory dedicated to Will.

During this adventure abroad she gets stuck having to help an older woman in a hospital by being her friend. But of course she gets partnered with someone who is dying which is even harder for her. But throughout he book she learns to listen and understand people better, even if they are dying it’s not a bad thing if you get attached to them. After all you are a product of all the lessons you have learned in life.

She also meets a famous actor and befriends him. She sees right through him believing and not believing that he is the person portrayed in the tabloids. They form a bond and he helps bring her to all the different locations. Again more lessons learned with this relationship and sometimes you notice how much everyone has a little baggage in their lives. It’s hard for everyone just in their own special way.

There is a lot of talk about God in this book, and don’t get me wrong I’m not very religions but it really fit the book well. I enjoyed reading this and meeting all the characters and even hearing the little Irish accents when they were talking to one another. It was very peaceful and emotional at the same time, especially the ending, tears just streamed down my face. It was a beautifully written book and I’m really glad I had a chance to read it.
Posted by Cathy De Los Santos at 3:22 PM

I absolutely loved this book as well. I'm glad that you enjoyed it!