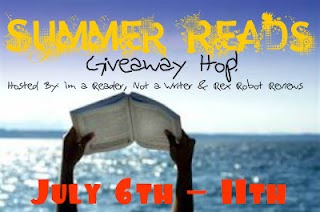 I absolutely LOVE the summer, there is nothing better than sitting on the porch in the backyard sipping on something cold and fruity watching the kids run around and play in the water while the smell of burgers on the grill drifts towards you.  It's a beaufitul thing.  Not only that but being able to live in flip flops, we only get that during the summer months considering flip flops are just not good for walking in the snow.

So here I am joining the Summer Reads Giveaway Hop hosted by I am a Reader, Not a Writer and Rex Robot Reviews. One lucky will win Second Chance Summer and a Mystery prize (possibly something I picked up at BEA). Good Luck to you all and YAH FOR SUMMER!!!! 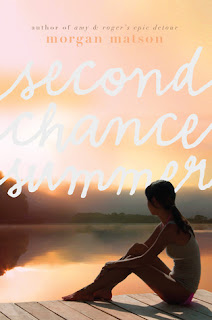 Description:
Taylor Edwards’ family might not be the closest-knit—everyone is a little too busy and overscheduled—but for the most part, they get along just fine. Then Taylor’s dad gets devastating news, and her parents decide that the family will spend one last summer all together at their old lake house in the Pocono Mountains.

Crammed into a place much smaller and more rustic than they are used to, they begin to get to know each other again. And Taylor discovers that the people she thought she had left behind haven’t actually gone anywhere. Her former best friend is still around, as is her first boyfriend…and he’s much cuter at seventeen than he was at twelve.

As the summer progresses and the Edwards become more of a family, they’re more aware than ever that they’re battling a ticking clock. Sometimes, though, there is just enough time to get a second chance—with family, with friends, and with love

Labels: giveaway, giveaway hop, i am a reader not a writer

Sit by the pool and read!

Read of course! I also love swimming in fresh water!

Christina K. in the rafflecopter

I love reading at the beach:)

Sit outside in the fresh air and read!! That's the best thing to do in the Summer, of course!

I love to go to the beach - and reading of course!

sit in the air conditioning and read.

My favorite thing to do would be lounging by the beach with a pina colada and a good book!

Reading a book at the beach.

Sitting in the A/C and reading a great book ;-)

My favorite thing to do is go swimming. Thanks so much for the giveaway!

i love going to the pool and eat a lot of ice cream!
thanks!

Lay in the sun reading a book.

During the summer I really just enjoy being lazy. I literally take a ridiculously long nap almost every day.

READ! Summer are the only days I have to enjoy my books!
(ileana-rafflecopter)

Read, of course! And blog. ;) Thanks for the giveaway!
~Shelby
http://gobsandgobsofbooks.blogspot.com/

I like getting the family together for a bbq

Read and relax at the beach!!

Swim, read, and just hang out at the beach!

It's like summer all year long in my country D: But I do like to relax at the beach :D

oh and you didn't state if your giveaway is international D: So I joined but just count me in if it is!

Go swimming with the kids!

There are so many things, but recently it has been riding these old cruiser bikes we fixed up around town. It's so much fun!

love reading in the hammock

Since I'm a teacher, I'm pretty busy during the year, so summer is the PERFECT time for me to spend some time with my family. I especially enjoy spending time with my mom, and learning new recipes from her...i love cooking with her! :D

Thank you for being part of the "Summer Reads Giveaway Hop" - for your generosity, may your days be warm & bright all year round. Thank you for the wonderful opportunity! :D

relax! and not run around like a mad person trying to get ready in the morning!

Read in a hammock under a cat pile. The only way to soak up a story, and my cats love to be read to!

I love having lazy day's with my kiddos :)

Besides read, of course, I love to go to my favorite ice cream parlor. YUM! I also practically live in bookstores to hide away from the heat. ;)

Thanks very much for the giveaway!!

Read at the pool

I love to go to the beach!

I'm not much of a summer person, I like to just stay inside with the ac on.

my favorite thing to do is to either lay by the pool or on the beach reading or doing nothing : )

nothing special since I live in Southeast Asia.