Review The Other Life 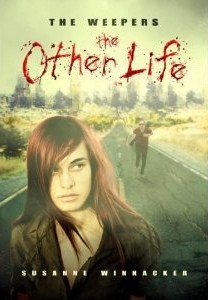 Description
3 years, 1 month, 1 week and 6 days since I’d seen daylight. One-fifth of my life. 98,409,602 seconds since the heavy, steel door had fallen shut and sealed us off from the world

Sherry has lived with her family in a sealed bunker since things went wrong up above. But when they run out of food, Sherry and her dad must venture outside. There they find a world of devastation, desolation...and the Weepers: savage, mutant killers.

When Sherry's dad is snatched, she joins forces with gorgeous but troubled Joshua - an Avenger, determined to destroy the Weepers.

But can Sherry keep her family and Joshua safe, when his desire for vengeance threatens them all?

Review
I have yet to read a book about zombies or zombie like creatures and this was a great start to it.  This book was really one I couldn't put it down. Basically read it in one sitting which hasn't happened for me in a while.

Sherry and her family have been living in a bunker for almost four years. They haven't heard from anyone in at least a year or two and now they are out of food. When they went into the bunker it was because the government told then to, there was am outbreak of rabies and people were acting strange. Sherry and her dad decide to go out and search for good.

During their search for food sherry and her dad were attacked by weepers.  trying to survive sherry flees from the store and this is where she runs into Joshua another survivor.  Joshua saves sherry from the weepers promising to go back in the morning for her father.  he takes her back to safe haven where she meets other survivors. They plan to go back tomorrow to get her family and look for her dad.

After rescuing her family Joshua and sherry go of to find her father. They are out to late and decide to find a place to stay after they hunted some weepers while searching for her dad. Both tired and beat they rest for a while but with everything that's happened recently its hard to rest easy.the next day they go out again and rescue some people including her father.

Back at the safe haven they are still restless as new discoveries are made about their situation and the rabies infected humans.  This book was a gear zombie type book and I can't wait to read what happens next.  Especially between Joshua and sherry throughout this while situation they find solace in each other.

I have always been fascinated by books and movies about this subject and am surprised how much I hope it really works out for the survivors, I'm rooting for them to kick butt. You definitely have to check out this series when it comes out.
Posted by Cathy De Los Santos at 6:00 AM