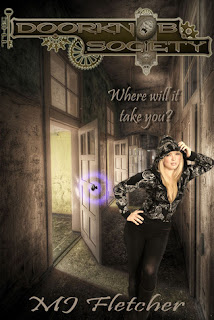 Description:
Chloe Masters’s world changed in a heartbeat - and all she did was touch a doorknob.

When she was young Chloe’s mother vanished. Wracked by feelings of abandonment and anger she lost herself traveling with her father's magic act, where illusions were part of her everyday life. Yet everything changes when they are pursued by a mysterious man in black out to kill her father. Touching a doorknob activates abilities she never knew she had and she finds herself thrust into a world of ancient societies and secrets.

When her father disappears it is a race against time to find answers before she loses what is left of her family. Now Chloe must choose who to trust, the man who will do anything for her or the one she can’t stop thinking about.

***********************************************************
Review:
I was very drawn to this book by its description, just seemed like something interesting and that I haven’t read yet, and I was right and this book did not disappoint. We meet Chloe at the beginning of the book where she has no clue what her family’s secret life is about until one day she tries to run away and once her hand touches the doorknob she’s transported to a different location. Completely confused and still on the run her father takes her back to her childhood home. Since they are always travelling to begin with it’s all new to her. She has a million questions to ask her father about everything that is going on, but he goes missing.


Now it’s her mission to find him. She now attends a special school for the Old Kind, which is what she is, where there are different societies and they don’t get along, even though there is a truce. We meet Edgar from the mapmakers, Sloane from the Engineers, then there’s of course Chloe (undeclared but family is doorknob society) and now there is Jess and Slade whore are Skeleton Key. Between the five of them they set out to try and find the mystery that is her father.

It’s all very adventurous and exciting with lots of mystery thrown into the mix. In regards to the characters, I love Edgar he just seems like the underdog, the smart one though that you can see his feelings on his sleeve. He’s the one you want as a bff. Then there’s Michael Slade who I don’t really particularly like. Maybe it’s just me but he seems a little machismo crybaby and I can’t stand that. Jess is a pleasant surprise. Nightshade, that’s where my eye is, there’s something about him. You can tell something happened in his past and you want to bring out the good in him, I know you know what I’m talking about. The bad boy everybody wants to have and turn them good while still being bad. Then there’s Chloe who is a little mouthy and I like it, but she’s got major trust issues, she’s spunky and confident.

The plot of the story was good, very mystery, Sci-Fi steam punkish scenery and gadgets with a little romance, possible love triangle. I liked it. It was very interesting and about ¾ of the way through it was action on top of action on top of action with some emotion threw in and that was great. I will definitely be reading the next book in the series to find out what happens next. I'll have to go run out and get The Impossible Engineers

“You did it.” Jess seemed impressed and surprised, her eyebrows arching.

“Noooo!” Gran’s scream startled us both as she came hurtling into the room, crashed into the island and crumbled to the floor. Blood poured from a gash along her hairline. She tried hard to get to her feet but it was no use. She had spent all her energy and finally slumped in defeat to the floor.

About the Author:
MJ Fletcher is the creator of the comic book series Adam Zero: The Last Man of Earth published by Ronin Studios. He's also been published in Hope: The Hero Initiative and Digital Webbing Presents. The Doorknob Society series is his fist book series and he's thrilled about it. He lives near the beach with his wife, daughter, dog, and a crotchety cat.

DISCLOSURE –
*Disclosure of Material Connection: I am a member of Reading Addiction Blog Tours and a copy of this book was provided to me by the author. Although payment may have been received by Reading Addiction Blog Tours, no payment was received by me in exchange for this review. There was no obligation to write a positive review. All opinions expressed are entirely my own and may not necessarily agree with those of the author, publisher, publicist, or readers of this review. This disclosure is in accordance with the Federal Trade Commision’s 16 CFR, Part 255, Guides Concerning Use of Endorcements and Testimonials in Advertising*
Posted by Unknown at 6:00 AM

Thank you for the review, I'm glad you enjoyed it and hope your readers do as well.

This looks like an interesting read. New author for me.

I have heard so many good things about this book. It's definitely going on my to read list. Thanks for the awesome review and giveaway!