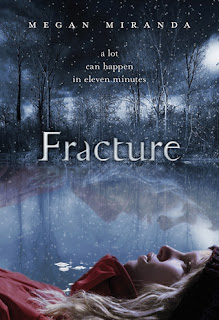 Description:
Eleven minutes passed before Delaney Maxwell was pulled from the icy waters of a Maine lake by her best friend Decker Phillips. By then her heart had stopped beating. Her brain had stopped working. She was dead. And yet she somehow defied medical precedent to come back seemingly fine

-despite the scans that showed significant brain damage. Everyone wants Delaney to be all right, but she knows she's far from normal. Pulled by strange sensations she can't control or explain, Delaney finds herself drawn to the dying. Is her altered brain now predicting death, or causing it?

Then Delaney meets Troy Varga, who recently emerged from a coma with similar abilities. At first she's reassured to find someone who understands the strangeness of her new existence, but Delaney soon discovers that Troy's motives aren't quite what she thought. Is their gift a miracle, a freak of nature-or something much more frightening?

I really want to read this one! It sound interesting! Great pick!

Ooh I'm on the blog tour for this one I'm really excited to read it! Awesome pick!

I like the cover! The book sounds very intense!! Great choice! Thank you for sharing!

I read an advance copy of this and it was SO good. I really loved it! Very different than what I usually read!

I'm in the middle of Greywalker Series with Kat Richardson and from the sound of this, it seems to be similar. If I happen to find a copy anywhere, I'll check it out.

I've been hearing a lot about this one. Really look forward to reading it. :)

Here is my Waiting on Wednesday: WoW

I have this one! starting it soon!

stop by my WOW post!? I have a few picks!

I can't wait to read this one either! I'm so glad I got it for review! Excitedddd. :D Sounds awesome