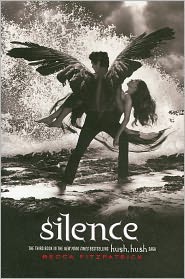 Description:
The noise between Patch and Nora is gone. They've overcome the secrets riddled in Patch's dark past...bridged two irreconcilable worlds...faced heart-wrenching tests of betrayal, loyalty and trust...and all for a love that will transcend the boundary between heaven and earth. Armed with nothing but their absolute faith in one another, Patch and Nora enter a desperate fight to stop a villain who holds the power to shatter everything they've worked for—and their love—forever.

Review:
Initially what drew me to this series were the covers on these books.  They are amazing.  I love black and white pictures and these were just fabulous.  This is the third book in the series, it took me a minute to remember what happened in the previous books not because they were unforgettable but because I've been reading way too much lately.  So we are back again in Nora's world.  At the end of Crescendo she was kidnapped, Chauncey was dead by her hand, and the Black Hand was after her.  The Black Hand as we know just happens to be her biological father, and now her mother's new boyfriend.  But Nora doesn't remember any of this, she doesn't even remember Patch only the black of his eyes and hair.  Hank (aka the Black Hand) has erased her memory trying to keep from her the fact that he was the one who kidnapped her.  Vee, her best friend isn't 100% honest with her and her mom is the same, because neither wants to mention Patch.

The book moves along with Nora slowly remembering things, well mostly about Patch and he helps her to fill in the gaps.  During this time she must pretend she doesn't know what's really going on with Hank while he's dating her mom, it's not the easiest thing but she is managing.  Hank is planning for the Nephilim to wage war with the Fallen Angels before Cheshvan, in the end Nora and Patch are successful in bringing him down but still it seems that a war is unavoidable.  No matter that the archangels have made a deal with Patch and Nora, or that Hank is no longer the leader of the Nephilim, war is coming.  And we won't see what side everyone is on until the next book which comes out in 2012.

Really I thought this was the end, Nora and Patch (both immortals now) finally together, but nope the story continues.  What will happen next?
Posted by Cathy De Los Santos at 9:35 AM

Don't you just hate it that we have to wait for the final book and at the same time it all ends there? lol Yeah I'm with you, I picked the book because of it's covers too.