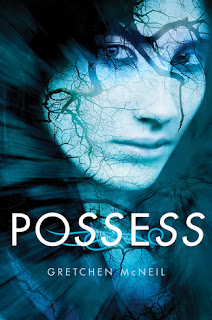 Product Description:
Fifteen-year-old Bridget Liu just wants to be left alone: by her mom, by the cute son of a local police sergeant, and by the eerie voices she can suddenly and inexplicably hear. Unfortunately for Bridget, it turns out the voices are demons – and Bridget has the rare ability to banish them back to whatever hell they came from.

Terrified to tell people about her new power, Bridget confides in a local priest who enlists her help in increasingly dangerous cases of demonic possession. But just as she is starting to come to terms with her new power, Bridget receives a startling message from one of the demons. Now Bridget must unlock the secret to the demons' plan before someone close to her winds up dead – or worse, the human vessel of a demon king.

I really wanted to read this book because I thought the cover was just gorgeous, seriously just look at it.  Reminds me of Carrie 2 at the end when all her veins start turning black.  So the book was good, I wasn't disappointed with it at all.  This could be the great beginning to a trilogy, yes I know not everything needs to be but there can definitely be a continuation to this story.

So we meet Bridget who is not so popular, she only hangs out with three people, her gay best friend Hector, Peter who is in love with her and Brad who may or may not be into Hector who knows.  So being the outsider she doesn't really think she's that special except for the fact that apparently she can banish demons.  She doesn't know why but has help from the priest at her school to help gain her knowledge in what this all means.  He always seems so excited about this, enter Father Santos another priest sent from the Vatican who puts doubt in Bridget's mind about who or what she is.  At one of the exorcisms or banishment as they like to call it in the book, one of the demons has a message for her.  It takes her a while to decipher it but her brother a second to decipher the second message from the other demons "Don't trust the priest".  She goes back and forth on which of the two priest she should trust.

Throughout all of this there is a love interest - but i have to say it felt rushed and pushed, like there was no real connection and they just start making out.  As if you know the book needed a love interest so this person was written in and there it was.  I didn't feel like they were a couple or whatever you would like to call them, it just wasn't there for me.  As if that character really didn't have a part in the book even though he did, he should have been more developed.  Back to the message so basically a big bad demon is coming and it's up to her to banish it.  The truth about which priest she shouldn't trust comes out and all hell breaks loose, but she finally let's herself go and accepts who and what she is.

I would recommend this book.  It's always great to dive into other worldly things.  Almost made me feel like I could see shadows that weren't there he he, great read for the Halloween season.
Posted by Cathy De Los Santos at 10:27 AM