This is a standalone Contemporary Romance, there is NO cliffhanger!
Buy links:
Amazon
Barnes and Noble
Smashwords
---
Add it on Goodreads 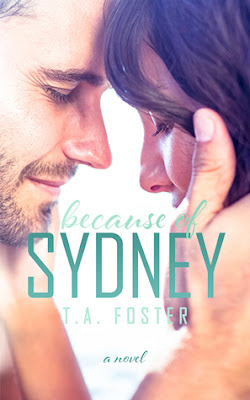 Description:
Determined to establish a new life far from the ghosts of her past, twenty-two year old Sydney Paige is willing to try anything to launch her reporting career and quiet the painful memories of her family back home.
Money-driven Mason Lachlan knows exactly what he wants in life and how to get it. Nothing stands in the way of the successful millionaire’s next deal, not even the deeply-buried anguish he feels from being abandoned by his father and tucked away as a dark family secret.
When Sydney must report the biggest land deal to hit South Padre in years, Mason becomes the focus of her story. Problems surface when their undeniable attraction for each other compromises everything they both have worked for.
Can love exist when bottom lines and deadlines collide?

Review:
We’ve met Mason previously in the Kissing Eden series and he was always an interesting character.  It was nice to finally see him again and introduce new people to him, someone who can finally tame that playboy status he lived by.  T.A. Foster never disappoints in any of the books I’ve read by her and this was definitely on the same path.  Not only was there a good story but there were also some very lovely private scenes between the two main characters while still being very tasteful.

We meet Sydney who is an up and coming journalist and on the verge of a great story about a company who is taking over the cove and planning to build a resort, who just happens to be Mason.  This is how they meet and there is an interest there even if Mason doesn’t want there to be.  One thing leads to another and their attraction is undeniable.  All it took was a few margaritas before things got out of hand and they threw caution to the wind.  I’m telling you tequila can be dangerous when it comes to human interactions.

Mason definitely begins fighting the attraction from the very beginning constantly saying how it is just pure fun and nothing more but he catches feelings quite quickly and unexpectedly that it even surprises him.  There is a lot of talk about their jobs and their conflicts of interest but the two make it work for a while on the fun side, until things aren’t fun anymore.  The two are really great together go and everyone around them can definitely see the changes but they face some challenges that they have to work through together.

I love some of the scenes in the books like the bonfire scene.  I really need to find a beach that offers this because it always seem so much fun and it was really great revisiting characters from the Kissing Eden Series, because they were always so much fun.

Overall the book was great, another great addition to T.A. Foster’s library and it was a quick and easy read that kept you interested from the beginning to the end.  The cover is very cute and eye catching because I would pick it up just to see what it was about.

About the Author:
T.A. Foster is a Southern girl whose heart and spirit are connected to the beach. She grew up catching rays and chasing waves along the North Carolina Outer Banks and now resides in the state with her adventurous pilot husband, two children and two canine kiddos.
Her long love affair with books started at an early age, and as soon as she was able, she transformed imaginative stories into words on paper. Time Spell is T.A.’s debut novel, and the first in a series about a very adventurous, clever, and magical girl named Ivy.
T.A. has an undergraduate degree in Journalism and Mass Communication from the University of North Carolina at Chapel Hill and a graduate degree in Educational Psychology from Texas A&M University. When she’s not chasing her two-legged and four-legged children or trying to escape for date night, you can find her reading, writing or planning her next beach trip.
Author Links:

To celebrate the release of Because of Sydney, TA Foster has her first book on sale for ONLY $0.99
Get it NOW!