Review: The Start of Me and You by Emery Lord 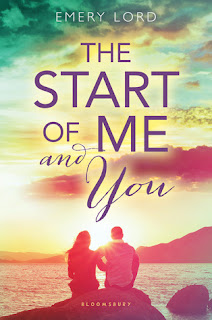 Description:
Following her pitch-perfect debut Open Road Summer, Emery Lord pens another gorgeous story of best friends, new love, & second chances.
Brimming with heartfelt relationships and authentic high-school dynamicsThe Start of Me and You proves that it’s never too late for second chances.
It’s been a year since it happened—when Paige Hancock’s first boyfriend died in an accident. After shutting out the world for two years, Paige is finally ready for a second chance at high school . . . and she has a plan. First: Get her old crush, Ryan Chase, to date her—the perfect way to convince everyone she’s back to normal. Next: Join a club—simple, it’s high school after all. But when Ryan’s sweet, nerdy cousin, Max, moves to town and recruits Paige for the Quiz Bowl team (of all things!) her perfect plan is thrown for a serious loop. Will Paige be able to face her fears and finally open herself up to the life she was meant to live?

The Start of Me and you was emotional, sweet, endearing and just an overall experience of family, friends and dealing with loss and moving on.  The characters were real and relatable and the story was about as real as can be.  It was tough reading this in some parts because I just went through a loss of a family member not too long ago so I could completely relate with the main character and this book literally brought me to tears at some points.  I enjoyed it from beginning to end and couldn’t help but yell at the main character sometimes.

We meet Paige who had recently within the past year lost her boyfriend, they may not have been going out that long but it’s still something unexpected and at a young age it’s hard to deal with loss of someone your own age.  Well really, it’s hard to deal with loss in general.  Paige comes back to school with a set goal to make improvements in her life.  Some not so realistic but still those goals lead her to better things in life.  She forms new friendships, rekindles the strong bond between own friendships and learns to move on with her life, no matter how hard it is.

She meets Max, well he reintroduces himself back into her life, since he was there before but has moved back and with their new found strong friendship they build a bond with one another.  Although I will say a couple of times I had to yell at Paige and wonder how she could be so completely clueless to the way Max was feeling about her.  I think it’s her one tracked mind of trying to accomplish her goals for the year which included going out with Max’s cousin, Ryan.  But regardless of that between Max, Ryan and her already existing friendships they make quite a new group with one another and they all lean on one another.  It’s sweet and endearing and I wish I had a set of best friends the way she does.  They are necessary in life sometimes.

There were some family issues as well that was dealt with in this book, not something that happens to often but it happens.  When two parents’ divorce and then start dating each other once again.  It’s hard to deal with but they do they best they can.  And can I say, grandma, love her.  You’ll have to read it to find out what I’m talking about but man is it worth the read.  Really heartfelt relationships in this book.  Will bring you to tears and make you smile with them all.

Overall this book was great, it had a little bit of everything and all very relatable.  I love the cover although I think I would have put them more at the pool or something, just to relate to the book a little more, but I get it.  The cover is catchy and will definitely make you pick this up to read the description.  I loved it.
Posted by Unknown at 12:00 AM