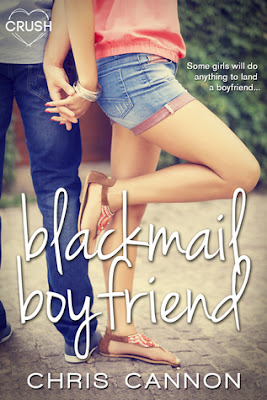 Description:
Sometimes, blackmail is the only weapon a girl has…Haley Patterson has had a crush on golden boy Bryce Colton for ages. But when she hears a rumor that he hooked up with her she gives him a choice: be her boyfriend for a month to show other guys that she’s dateable—despite her overprotective and very intimidating brothers—or deal with the angry, cage-fighting boyfriend of the girl he actually did hook up with.Bryce didn’t know the other Haley even had a boyfriend. He was just trying to get his ex off his back. And now, not only is he being blackmailed, he's being blackmailed by an honor student. His new “girlfriend” has two three-legged dogs, her father mows grass at the country club, and she's…well, difficult. And different.Can something so fake turn into something real?

This was a super cute book that I had to read as quickly as possible because I wanted to know what happened next.  It just had adorable characters that you couldn’t help rooting for, sometimes blackmailing works out in the positive note, sometimes.  Depends on what is being blackmailed.

So we meet Haley who was used by someone else so they wouldn’t get in trouble, which leads everyone in school to believe she hooked up with the cutest guy in school.  Of course not being true she confronts him and one thing leads to another she decided to play along with this for a while.  At least so her brothers will let up on the overprotectiveness so she can actually start dating people.  Bryce, he’s a very popular kid and very much has more money than most along with his best friend Jake who really does have more money than everyone in town.  Throw in Jane who is this quirky outspoken best friend to Haley and you have quite the foursome.

I loved every time Jane spoke because she seemed the realest, and just like the perfect best friend, definitely someone you want on your side always.  Let’s not forget all the cupcakes, super yum and definitely made me want to have some.  Even though I didn’t because Jane wasn’t there to make them for me lol.  So it’s cute to see these four people all so different from one another grow interest and start to become true friends.  It was sweet, and you never know it could really happen it all depends on you.

Overall I thought the story was cute, and it was a sweet read, very crush worthy.  I love the cover because it too was sweet and very innocent like the main character Haley.  She was adorable just wanted to put her in my pocket.  She was small after all.  Bryce too grew on me but in the beginning he was just too much rich boy you know.  Read it, it’s worth it.  Great quick fun summer read.

Disclaimer:
I received this book from NetGalley and Entangled Publishing, LLC (Entangled Crush), so that I may give my honest opinion and a review. Whether it is good or not please do not let it discourage you from purchasing/reading the book yourself and forming your own opinion. What might be good for me may not be good for you and vice versa. With that said, Happy Reading Everyone!!!

Posted by Cathy De Los Santos at 7:56 AM