Review: Things We Know by Heart by Jessi Kirby 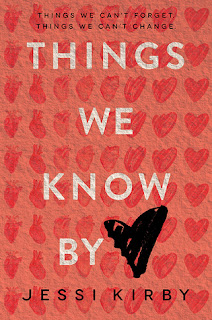 Description:
When Quinn Sullivan meets the recipient of her boyfriend’s donated heart, the two form an unexpected connection.

After Quinn loses her boyfriend, Trent, in an accident their junior year, she reaches out to the recipients of his donated organs in hopes of picking up the pieces of her now-unrecognizable life. She hears back from some of them, but the person who received Trent’s heart has remained silent. The essence of a person, she has always believed, is in the heart. If she finds Trent’s, then maybe she can have peace once and for all.

Risking everything in order to finally lay her memories to rest, Quinn goes outside the system to track down nineteen-year-old Colton Thomas—a guy whose life has been forever changed by this priceless gift. But what starts as an accidental run-in quickly develops into more, sparking an undeniable attraction. She doesn't want to give in to it—especially since he has no idea how they're connected—but their time together has made Quinn feel alive again. No matter how hard she’s falling for Colton, each beat of his heart reminds her of all she’s lost…and all that remains at stake.

I have read one book by Jessi Kirby in the past, and have been meaning to read another by her but this book by far I thought was amazing in every way.  Jessi Kirby really knows how to bring you into a story line and feel every little part.  This book gave me hope and even though it was mentioned literally in the book I feel like these two hearts were just destined to be connected forever.  Its fate at least that is what I will believe in my own heart.

We meet Quinn who has lost her boyfriend and is on a mission to communicate with all the donors who received pieces of him.  She has rules set for herself that she will not get involved or break her rules and meet the one who received Trent’s heart (as he is the only one who hasn’t responded back to her), but she does accidentally sort of, it’s really sweet how they meet, even a little funny.  Talk about interesting and unexpected really, and the sunflower can I just say how much I absolutely love sunflowers!  You have to read the book to know what I’m talking about but believe me you will not be disappointed.  Their meeting alone or second meeting or all meetings are just fun to read.

Colton, the heart recipient, is just trying to move on with his life and try to forget that anything happened to him.  As difficult as that is, but with his carefree attitude he helps Quinn rediscover herself as she learns to start letting go and living again.  Colton is a breath of fresh air with his adventurous tendencies, and although some may not be as safe as you would think there is something about him that is contagious.  He’s sweet and thoughtful; you can’t help but fall in love with him too.  Their relationship is sweet and sure it’s based on some lies or well omissions of how they really know each other, that’s just an added bonus to see how much they really mean to each other in the end.

Overall I really loved this book, it was amazing, had me smiling, crying, laughing and just going on their little adventures with them and feeling amazed.  It was beautiful and I hope you can pick it up and read it, because not only was it beautifully written but it’s also a great quick read to bring you sadness and joy.  Love the cover, the characters just everything about this book.  Will definitely be reading more of Jessi Kirby’s books.
Posted by Unknown at 12:00 AM