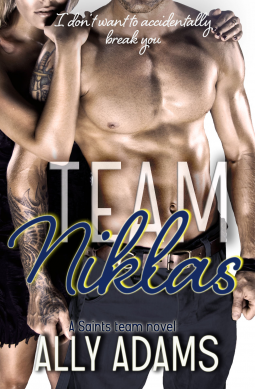 “I won’t hurt your body or your heart.”
In his hometown of Berlin, Germany, Niklas Wagner is a super star and when the Saints’ pay the big bucks to sign him up and bring him to Santa Ana, California, Nik takes a shine to his new life. When he meets the Saints’ media officer, Sasha Saxon, sparks fly literally.
But Sasha is not your average girl—by day she is a journalist who looks after the media for the national champion soccer team and at night she designs for her personal fashion label. She had big dreams and they don’t include a boyfriend. Nik has never had to chase the girls but now he has met his match—Sasha is about to lead him on the biggest chase of his life.

Oh the Saints team, I need to find me a soccer player, they all seem quite wonderful and from all over the world.  This book was about the German on the team, who I tried to picture speaking and acting and all I got was very blunt, quiet and private.  But we got to see the very fashionable Sasha in this book too and the two of them was quite electric.  They really did have quite the spark.

Sasha recently got out of a relationship so was very hesitant to move on so quickly but the Kaiser (Nik) was very persistent.  Sometimes persistence really does pay off because he finally got her to go out on a date with her.  The two of them are kind of different but the same, if that makes any sense.  You get the sense that Sasha is very carefree, dances to her own beat and now tries to think before she acts, while Nik is very straight forward and when he wants something he goes full hardcore to get it.

The majority of the book was them trying to get to a relationship, the cat and mouse game until finally Sasha gives in.  I was almost done with the book when I started wondering when things were going to go wrong because everything was just going too right for them between family and friends.  Even the jinx they had in the beginning of someone always getting injured when they were together had disappeared, but you do get a bit of conflict close to the end and it’s really how you deal with it that matters.  Let’s just say some people didn’t deal with it as they should have causing Nik more distress than necessary.

We learned a lot about Nik and why he is the way he is, it always leads to a hard upbringing.  But it was very interesting finding out.  Sasha too has a big family so in that they were opposite but they bought it all together the way it should have.

Overall the book was good, there were some great scenes.  It was a little short and not as in depth as the first book, but I have to say I really, really hope there is another book about the Russian.  Because he’s just too tall and adorable for me not to want to read about him.  Great quick fun summer read and another view at all these beautiful men of the Saints team.  You should definitely check this book out just to continue with the series because you do get some insight on some of the other men from the team.

Links:
Disclaimer:
I received this book from NetGalley and Atlas Productions, so that I may give my honest opinion and a review. Whether it is good or not please do not let it discourage you from purchasing/reading the book yourself and forming your own opinion. What might be good for me may not be good for you and vice versa. With that said, Happy Reading Everyone!!!