Review: The Truth About You and Me by 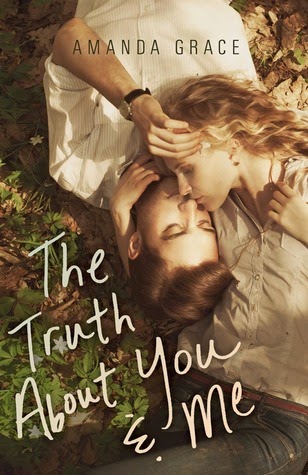 The Truth About You and Me
By:  Amanda Grace, Mandy Hubbard
Release Date: September 8, 2013

Madelyn Hawkins is super smart. At sixteen, she's so gifted that she can attend college through a special program at her high school. On her first day, she meets Bennett. He's cute, funny, and kind. He understands Madelyn and what she's endured - and missed out on - in order to excel academically and please her parents. Now, for the first time in her life, she's falling in love.
There's only one problem. Bennett is Madelyn's college professor, and he thinks she's eighteen - because she hasn't told him the truth.
The story of their forbidden romance is told in letters that Madelyn writes to Bennett - both a heart-searing ode to their ill-fated love and an apology.
Review:
This was a quick read about a love that was forbidden and a girl who was just trying to find herself in the process. The author wrote this book in the format of letters written to a guy explaining why she did the things she did.  It was intriguing and even though you knew it would not end well it was still interesting to read through the experience.
We meet Madelyn as she is starting her college career while still being in high school. She's just that smart or at least you would think she was. She is definitely book smart to be starting college at the age of sixteen but being as sheltered as she was, Madelyn didn't know how to handle a relationship let alone one with a much older man. This is where she meets Bennett her biology professor who is a young twenty five when they first met. He should have known better as well but there was something about Madelyn that he couldn't resist. Even though he knew it was forbidden and being the adult should have known better.
He knew they couldn't really be together at least not until she was not his student anymore. So Madelyn tells the story of how they met and the secret moments they spent together getting to know one another. All waiting for that fateful day when they can finally be together. But Madeline naïve and actually believes they can be together even with a ten year age difference.
It's sad to see them fall apart after all its illegal what they are doing. The author set the pace just right for a young girl showing the difficulties she has with trying to be what her family wants and at the same time wanting to be her own person. The short time period of everything really shows how quickly things can go wrong and even though things didn't end the way Madelyn wanted to she did end up finding who she is and what she wants to do with her life.
Goes to show you that even though you are young you shouldn't jump into things that you don't fully comprehend or are ready to deal with in reality. It was an interesting read and definitely opened my eyes to these kinds of situations from a different perspective. I really like the cover and what this story represents. Great quick read, light hearted and serious at the same time. Because really this could have gone very differently.
Posted by Unknown at 8:19 PM