I am very fortunate to have a fabulous guest post for Taryn Browning the author of Whispering Hills.  In her guest post Taryn will tell us what her main character hears (as she can here people's decisions).  Here's the guest post:

'I could fall asleep right here after staying up all night studying’;
‘I’m finishing this cupcake, screw the calories’;
‘I’m sneaking out to the courtyard for a smoke before class’;
‘I’m attending that party tonight no matter what my parents say’;
‘I need to cut myself so I don’t feel the pain any longer’;
‘I’m actually going to study this chapter tonight. If I fail this class, I’m not going to graduate’;
‘I’m asking Tiffany to the dance after class’;
‘I think I have a fever. Straight to the nurse when Jacobs stops rambling.'

These are some of the more "harmless" day-to-day decisions Alexis hears, until the day she suddenly hears the intentions of a killer - only at first she has no idea the murderer is actually...dead.

Not all the decisions are pretty, but hearing someones plans to abduct and murder a teenage girl from her high school sends her on a quest to find the truth. Only she can't tell anyone what she knows. No one would believe her. Alexis soon learns she has a connection to the ghost who has returned to her quiet suburban town of Whispering Hills, Virginia. As Alexis discovers, there's nothing worse than hearing the thoughts of a ghost who wants you dead. 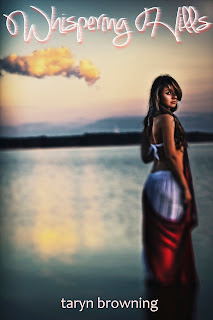 Description:
For as long as she can remember, 17-year-old Alexis Forbes can hear the thoughts of others. Most recently, she is disturbed by the dark, unfamiliar voice of a frightening killer: callous, cunning, charismatic…and dead. She hears his every sinister thought. But she can’t tell anyone. No one would believe her. Alexis is suddenly being haunted by a terrifying past she doesn’t remember, and a ghost with a serious score to settle. Even Chance, the gorgeous new guy she’s falling for, has his own ghostly secret. He’s definitely not like any guy she’s ever met. Alexis soon discovers she has a connection to the dead and it runs much deeper than she could ever imagine. And if the sociopathic entity has his way, she’ll finally be sentenced to the fate she escaped thirteen years ago

Review:
Alexis is just passing through like a normal student in high school, well as normal as a girl can be with the ability to hear the decisions people make in their minds.  That's when she hears "him" make the decision to kill her, and put her in the lake.  But who is he and who is the her he is going to kill?  Alexis goes on a search to find out who this him is.  There has been word that the mayor's daughter has been missing.  Could this be the her that he was talking about?  Eventually the mayor's daughter is found dead in the lake.  A place that Alexis has been searching as she knows that is where he planned on dumping her, and apparently the mayor's daughter had something of his and he's going to go back and look for it.  Alexis tries to feel him out and figure out who he is but she gets distracted when she runs into Chance.  He's the new boy at school and there is just something about him as she feels they have a very strong and deep connection to one another.  It's like something is pulling them together, they start to hang out and the feeling is mutual as their relationship continues to grow and at a rapid pace.  Little do they know that the reason they feel this strong connection is because they share a past that Alexis can't remember, but Chance knows all about it because he's not really all there without his special necklace.

Gabriel is Chance's cousin.  They are complete opposites, where Chance is pure sweetness, Gabriel is the epitome of evil.  It seems to roll off his skin.  While in school Alexis begins to befriend Summer, who in her own right has her own secrets.  She has magical powers, stronger than she even realizes.  The four of them together is a dangerous thing because that connection that Alexis and Chance feel involves all four of them.  I won't say what that is as you really should read the book.  It's an interesting story and lots of witchy things going on.
Throughout the book Alexis discovers more about her past and finds out why and when she finally had the ability to read people's minds, well not completely only the decisions they make.  Gabriel being the evil person that he is, is out for pure revenge.  He believes because of Summer and Alexis, his life is the way it is.  He's a ghost, and turns out so is his cousin.  But why does he blame these two girls?  Why is he so unbelievably evil and will he win in the end?  There's a fight of good and evil, and compromises that need to be made.
This was a good book, I haven't read anything about ghosts recently so it was interesting, throw in a witch and a girl who can read minds and you've got yourself an interesting read.  If you want to find out more about the four of them make sure to sign up for the giveaway where you will win one free e-book copy of  Whispering Hills.  A town just like any other, full of secrets that will soon be brought out into the light.  The truth comes out and things need to be made right before someone else dies.

Taryn graduated with a BS in Education from Towson University and went on to earn a MS in Reading from Hood College. She lives in Virginia with her husband, two young sons and their dog. When she's not writing, she enjoys reading, spending time with friends and family, music, movies, and the beach. Visit her at http://www.tarynbrowning.com/, on twitter and facebook.

Posted by Cathy De Los Santos at 6:53 AM

If I was Alexis no decisions would ever be made! I'm far too indecisive, it's a real fault of mine.

I would hear my husband telling me to get off the computer and help get things done around the house!! LOL

Thank you for the wonderful review and post! :) And thanks for being part of the tour! It's been so much fun! <3

I feel Alexis is hearing evil and she should decide to find the what the mayor's daughter had of the murderer's and why she is really drawn to Chance. I'm not sure if this what you want but I tried. Thanks for the review & giveaway.