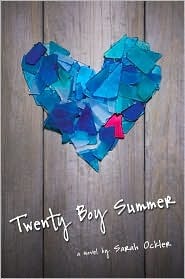 Description:
Don’t worry, Anna. I’ll tell her, okay? Just let me think about the best way to do it."
"Okay."
"Promise me? Promise you won’t say anything?"
"Don’t worry.” I laughed. “It’s our secret, right?"
According to Anna’s best friend, Frankie, twenty days in Zanzibar Bay is the perfect opportunity to have a summer fling, and if they meet one boy every day, there’s a pretty good chance Anna will find her first summer romance. Anna lightheartedly agrees to the game, but there’s something she hasn’t told Frankie–she’s already had her romance, and it was with Frankie’s older brother, Matt, just before his tragic death one year ago.

TWENTY BOY SUMMER explores what it truly means to love someone, what it means to grieve, and ultimately, how to make the most of every beautiful moment life has to offer.

Review:
This book was unequivocally one of the most heart wrenching honest books I have read in a really long time.  I could not put it down and I did not want it to end.  It was beautifully written and just amazing, I couldn't give this enough praise even if I tried.

In the beginning of the book we meet Frankie and Matt (brother and sister) and their best friend Anna who is also their next door neighbor.  They are all inseparable and like many instances sometimes there are two people in a triangle of friends who feel more than just friends, in this story that is Anna and Matt.  On her fifteenth birthday her wish was for Matt to finally see her and just kiss her.  After a very fun frosting fight, they go out back to get cleaned up and yes, they kissed.  Her wish came true (sigh).  After a month of secret rendezvous Matt is finally going to tell his sister that he and Anna are together.  But then the unimaginable happens.  All three of them are in the car their last night before the brother and sister are off to California for their summer vacation, they get into a car accident.  At the hospital the doctor comes out and tells them all that Matt didn't make it turns out he had a hole in his heart that no one new about.

In come the tears (mine and in the book).

What's Anna to do now, the boy she's been in love with forever is suddenly gone and she can't even really talk about it because it was their secret until he was ready to tell his sister.

Insert my heart aching for them. Seriously.

A year has passed by and it's time for them to go on their annual vacation to California, this time they invite Anna to go along with them.  Frankie has changed quite a bit and her parents are still not fully there, one day her mom is good the next day she's not.  Off they go on their adventure to try and have the best summer ever.  Frankie devises a plan for a twenty boy summer.  They get looks from some guys but then her parents show up.  One day they are at the alcove that Matt used to hang out at and these two guys come up to them carrying boards.  Locals.  And they are hot.  Jake is obviously interested in Frankie and they are off together.  Which leaves Anna with Sam.  Slowly their relationship grows and the twenty boy summer plan is eventually ditched because Anna starts to have feelings for Sam.  But she's scared because she feels as if she gets too close to Sam then all memories of Matt will be erased.

Seeing their relationship grow and Frankie still being well Frankie is just a beautiful thing.  Anna documents all her thoughts in her journal, the last present given to her by Matt.  She spends time writing him letters about everything.  Every night they sneak out to meet the boys and everything is going great.  Until the night of the party.  Alcohol is involved, and Anna finally lets herself get close to Sam, closer than she's been with anyone.  Frankie stays behind partying it up.  The next morning when Anna goes back to the house she finds Frankie undeniably upset.  Apparently she finds the journal and has read it.  She's finally found out about Matt and Anna and is furious.

When they get back home to upstate New York they finally sit down and have a real honest talk with each other.  Everything that needed to be said is said.  Realizations are made.  The truth is finally out there and now they can finally start to work on moving on and getting over everything that happened and their loss of Matt.

This book was perfect in every way.  I wouldn't have changed a thing because it's really true that everything happens for a reason.  This is a must read for anyone.  Their is first love, grief, new loves, adventures, friendships, family issues.  I would recommend this to anyone and everyone.  This book will stay with me for a very long time.

But when he died, that dream died, too.Guys? Getting closeThat close? It hurts too much to think about. If I kiss someone else, the spell will be broken, and my memories of Matt and everything I wrapped up in them will be erased.

I really don't even know you, and yet, in my life, you are forever entangled; to my history, inextricably bound.

Posted by Cathy De Los Santos at 1:38 AM