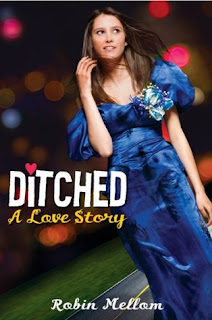 Description:
High school senior Justina Griffith was never the girl who dreamed of going to prom. Designer dresses and strappy heels? Not her thing. So she never expected her best friend, Ian Clark, to ask her. Ian, who promised her the most amazing night at prom. And then ditched her.


Review:
The cover of this book was great, she just looked like a really pathetic girl who just had a really big adventure and she's ready to tell us.  And I was definitely ready to hear about it.  I mean really who doesn't like gossip.  The way this story is told is everything has already happened and she's at a local 7Eleven telling her story to the girl at the register and a lady who came in for her routine stop.  It's just the three of them listening to Justina's sad prom story about how she got ditched by the boy she wanted at the prom left at the side of the road.

We meet Justina who is someone who has a reputation for kissing boys, lots of them.  (Which I know there are worse things out there but to her this is a bad reputation)  She has vowed not to kiss anyone until it really means something.  That's when Ian comes into the picture, they are friends but something happened one day and she just starting seeing him differently.  In a new light he seemed like someone she wanted to be with.  She was going to break her vow with him on Prom night which she had all planned out.

But you know how the saying goes, you shouldn't plan something because there will always be something that goes wrong (that's not the actual saying but you know what I mean), and wrong it goes.  First she is 100% matched out, blue dress, blue corsage, blue watch, blue purse all thanks to her mother, let's face it who is really trying to relive her own prom when fashion like that was okay.  I thought this was a good story to read since Prom is just around the corner for many people.  I myself never went to prom but I'm ok with that, really, I am.  Anyway back to the book.

So Ian picks up Justina and bam there goes her first stain on her dress - curry.  They are off to the preparty (where her expected kiss is planned to be) but somehow she ends up kissing someone else.  Then they are off to prom - where more stains happen, a ripped dress, and a bout of jealousy.  She does get to meet two very cool girls from the "other" school and they really come through on the friendship throughout the whole book.  I really liked the foursome that she was hanging out with.  Mike, Mike, Serenity and Bliss.  They were really great supporting characters and I wouldn't have minded hearing more of their stories.

Turns out Ian ditches her to go do something, she has no idea what and on goes the adventure of her driving from place to place in search of him and just missing him and all the while the two ladies at 7Eleven are trying to give her advice.  Men are scumbags one of them says, the other says what about all the questions to answers you have like why did he leave etc etc.

This was overall a really great read.  It was fun going on their adventure.  I've never had days like that not saying that I want to but sometimes it would be fun to have a disastrous adventure that changes in the end.  Like they say everything happens for a reason and sometimes it's fun to go through.

Quotes from the Book:
“Men are scumbags until they prove they're women.”

“Guys don't know the power we hold over them with the right tint of lip gloss.”

My Favorite and today's Teaser:
"But punching out the prom queen in the parking lot of the In-N-Out was beyond redneck. Surely there was a glimmer of class left in me."
Posted by Cathy De Los Santos at 3:52 PM

Glad you liked the book! I really enjoyed it as well. Definitely a fast-paced entertaining read. :)