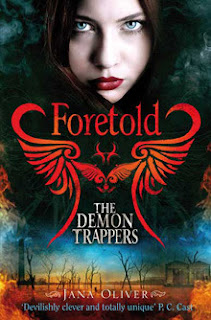 Stand by as Riley prepares to kick some serious demon butt for the last time in this thrilling, dramatic and sexy conclusion to The Demon Trappers series.


Riley’s always known that Beck had a chequered history, but she’s not prepared for what it actually means to be in love with a guy with this many dark secrets. Now that he’s finally admitted to himself that he’s in love with her too, there’s no more hiding the truth about his past. And as it turns out, fending off a demon apocalypse is nothing compared to what’s to come...(
Posted by Cathy De Los Santos at 12:00 AM

Yep, this is on my waitinglist, too! I am looking forward to it, hope we'll both enjoy it once it gets out! ;) Thanks for sharing!

I haven't started this series, but have heard so many great things about it. I should really get to it.

I haven't read this series yet. I have the first two books from the library at the moment so I hope to get to read them soon.

Thanks for stopping by my WOW

Haven't read any Demon Trapper novels yet, but I do own the first one! I'm so curious about the whole series!! :)

I haven't read this series but wow this cover really jumps out at you. I really like the color of the font too.

This is the first time hearing about this series. I will have to check it out..

Thanks for stopping by my blog and commenting on my WoW post!

Forbidden was so AWESOME! Great pick!=D

Drop by my WoW?
http://tumblinginbooks.blogspot.com/2012/04/waiting-on-7-clues-to-winning-you-by.html

Never heard of the series before--sounds like it would be interesting. Great cover!!
My WoW: http://bellesbookbag.blogspot.com/2012/04/waiting-on-wednesday_18.html

I've read the first two in these series, Forgiven and Forsaken (at least I think, I'm not sure about the Forgiven title...Might be something else! But it sounds like it) so I'm definitely looking forward to this one. Awesome choice!

Check out my WoW

I've been meaning to start this series since forever. -.- Hopefully I'll have more time during my Summer break and will be able to read it then. Great choice however!

Aleksandra and her WoW

Awesome pick! I've never heard of this series before. Book one is officially added to my TBR list. Thanks for sharing.

I hadn't heard of this series before, but you had me at fending off a demon apocalypse.

How have I not even heard of this series before? I will have to check them out, thanks! :)

Thanks for stopping by my blog! :)

I haven't read this series. I like the cover though.
Thanks for stopping by My WoW

Oh August, come soon! I read the three other books of the series and I want to know, how the series ends! Now would be great as well! ;)

Thanks for sharing and stopping by our blog.

Wait....BOOK 4! Are you kidding me? I must have been living under a rock or something. I've read book 1, knew book 2 was out, but book 3 is out too. Ugh. School is seriously frying my brain and taking up my book reading time. I'm not sure if I'm happy that you filled me in on the fact that this one will be out soon, sad that I've been missing out, or glad that I have so many books to look forward to. Decisions, decisions. OK - going to add 2, 3, and 4 to my TBR list so I won't miss out. (This might be the longest WoW comment I've ever left, hah!)

Our WoW is at Book Sake. –Jessica

The Demon Trappers sounds like a good series. Have fun reading!

I couldn't get into the first book of the series, but I may have to try again because this one sounds awesome! Thanks for stopping by!

I really need to start this series. I have the first book, just not the time. Nice choice!

Thanks for stopping by. :-)

Nice pick! I know lots of people who love this series. I've read book one, but haven't read the rest. Thanks for sharing!

I haven´t read this series, but I have heard that they´re good.
My WOW

Looks like an interesting pick! Thanks for sharing and stopping by my blog!

I hadn't heard of this one before. Thanks for the suggestion and for stopping by our blog!